Andrew Van-Wyngarden explains why the band's label will have more control this time around. 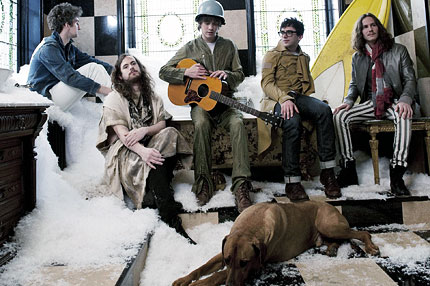 Do you miss the old MGMT? You know, the headband and Ray Ban-wearing party-starters whose Grammy-nominated debut produced hits like “Kids,” “Electric Feel,” and “Time to Pretend”? Well, so does the band’s record label, which is reeling in their creative control on their upcoming third LP, following the poor sales of 2010’s psychedelic release Congratulations.

“We’ve been looking at relationships with the label during the recording process and it’s quite different this time,” Andrew Van-Wyngarden told Scotland’s Daily Record. “They’ll be more involved and not give us as much freedom.”

“We have some ideas and have been talking about possible directions of where to go next,” he continued. “I definitely think our music will change in the future because Congratulations is almost two years old now.”

Van-Wyngarden added that he and partner Ben Goldwasser’s mood has improved since their last release. “We are just in much more positive mental states than when we wrote Congratulations,” he said. “We’re less anxious.”

What do you think about MGMT’s potential return to their catchier pop sound? Tell us in the comment section below.