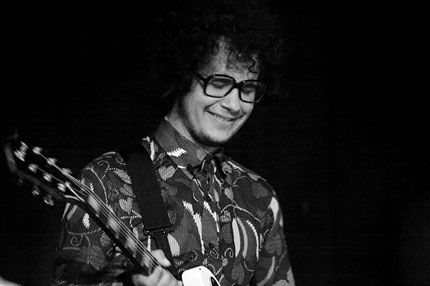 Since the 2001 dissolution of post-hardcore heroes At The Drive-In, guitarist Omar Rodriguez-Lopez formed the Mars Volta, produced artists like Juliette Lewis, and released a mind-boggling number of solo and collaborative albums (over 35!). Monday night in San Francisco, his latest and most experimental project, the Omar Rodriguez-Lopez Group, played their first U.S. show — and they unleashed a prog-space odyssey on the Great American Music Hall.

Compared to Mars Volta, the Omar Rodriguez-Lopez Group’s sound is more mellow and experimental. Most of their hour-and-a-half-long set was impressive instrumental jams, which found electronic flourishes comfortably sharing space with Rodriguez-Lopez’s kaleidoscopic guitar riffs and Parks’ frenetic jazz drumming. With the band’s namesake — sporting his trademark big glasses and bigger hair — hiding out at the back of the stage, Parks became the focal point, his arms flailing as he pounded out the off-kilter beats. Even though Rodriguez-Lopez was running the show, his guitar heroics were just part of the mix; he democratically made room for solos from all of the skilled players in his band.

Their set included gems from 2009’s Solar Gambling, Xenophanes, and Los Sueños De Un Higado, plus new, never-before-heard songs from their upcoming 2010 release Un Escorpión Perfumado (his 16th solo album!). Rodriguez-Lopez even admitted that their show was basically a improvisational jam rehearsal. And that was okay with the crowd — all Rodriguez-Lopez fanatics, who know to expect freeform and experimental sounds from the rogue rocker. The 600-capacity audience hung on every note and shift in rhythm, and they brought their own, ahem, smoke machines, firing up so many pipes and joints that there was a moment when it was hard to see the band.

30 minutes into the set, Rodriguez-Lopez invited onstage singer Sariñana Rivera –who’s 24, but looks like she’s about 16. Avoiding the spotlight, she hung out in back with Rodriguez-Lopez, where she danced in place like a hippie at a summer festival. Over five songs, she used her vocals — long, stretched-out Spanish lyrics — as a texture that, though intermittent, acted as the glue to a sound that occasionally teetered on the edge of losing the plot. Like the rest of the band’s instrumentation, her voice helped heat up or cool down an expansive sound that attempted to burrow deep inside listeners’ brains.

Earlier in the night, before the Omar Rodriguez-Lopez Group made their debut, Le Butcherettes, a Mexican garage rock duo (plus live bassist), took the stage. The band played tracks from their debut album, Sin Sin Sin, which Rodriguez-Lopez produced, played on, and plans to release it on his Rodriguez Lopez Productions early next year. He didn’t make an appearance during their opening set, which is best for everyone involved: His stage presence would have been dwarfed by frontwoman Teri Gender Bender, whose authority over the band’s politically-charged punk and blues-rock was driven home by the masks covering the rhythm section.

Contrary to what her stage name may imply, Ms. Gender Bender was born a woman, and while delivering her bursts of energy from behind a keyboard or with a guitar, she brought the Karen O and PJ Harvey comparisons to life. She also won over any doubtful audience members when she kicked off her shoes and made her way around the floor, getting up close and personal and meeting new friends the old-fashioned way: singing directly into their faces. Watch out for Le Butcherettes.

Marc Hawthorne
Tags: We Were There