R&B man, whose new collaborative album with the Roots is out this month, talks about his all-time favorite music. 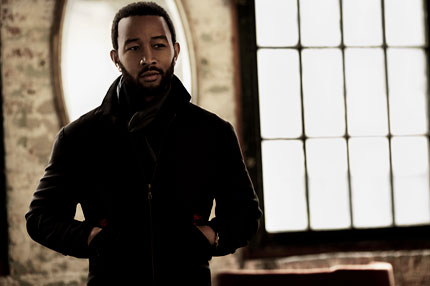 R&B man, whose new collaborative album with the Roots is out this month, talks about his all-time favorite music.

What was the last concert you attended?
A few weeks ago, I saw Erykah Badu in Barcelona. It was a really good show. She’s got an aura that allows her to take command of the stage.

Who comes after Radiohead on your iPod?
Rahsaan Patterson, a neo-soul artist who had a moment about ten years ago when all this neo-soul was coming out. At the time, I was looking for inspiration from that genre.

Do you remember the first album you bought with your own money?
We weren’t allowed to have secular music in the house growing up. I was home-schooled, and gospel was the only choice we had. My favorite stuff was Walter Hawkins and John P. Kee. Once my parents divorced, they loosened up. I went to public school, and everyone was into Hi-Five. I still love “The Kissing Game.” And ABC. At talent shows, my friends and I used to dance to “Playground” and “Iesha.”

What song do you associate with your first kiss?
My first attempt at a kiss was in fifth grade, but it didn’t go so well. Later, I used Boyz II Men and Jodeci songs to come on to girls. I had more success.

Who would you like to portray in a rock biopic?
Marvin Gaye. He lived a really intriguing life. My dad liked a lot of Motown, but I didn’t listen to it until my teenage years. I figured Marvin was someone I should know everything about.

Who’s the most controversial artist you’ve been a fan of?
Probably Biggie and Snoop Dogg. If you listen to ’90s hip-hop now, it was way more gritty and vulgar. But I think reality was worse in the ’90s. I always felt that rap didn’t cause crime; it just reflected it. Everybody’s kind of mellowed out a bit since.

What were you listening to the first time you smoked pot?
That was in college, so it could have easily been Lauryn Hill.

Name a playlist on your iPod.
I’ve got one for when I want a sexy vibe. There’s a lot on there: Sade, Jeff Buckley, India.Arie, Feist. I love “Secret Heart” and “Lonely, Lonely.” They’re very romance-oriented.

If you could curate a festival, who would be on the bill?
Kanye West, Amy Winehouse, Jay-Z, and Arcade Fire. It’d be a solid festival if you could afford it.