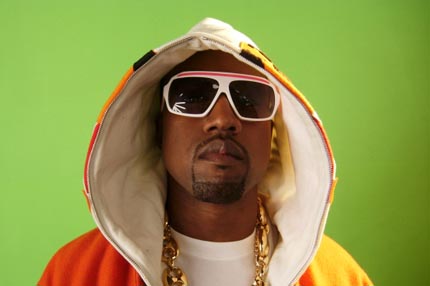 Kanye West’s still-untitled album will reportedly hit storeson November 22 but the rapper is releasing new music at a furious pace leading up to its release. The latest track to hit the web is “Lost in the World,” featuring a sample of Bon Iver’s “Woods.” Hear it below!

On the track, West pairs Bon Iver’s Auto-Tune-heavy track with a martial beat and tribal shouting. He also quotes Michael Jackson’s “Wanna Be Startin’ Somethin'” and raps about getting laid: “If we die in each other’s arms, still get laid in the afterlife.” As if the use of Bon Iver’s song wasn’t odd enough, West closes out the song by sampling Gil Scott-Heron’s radical spoken word poem “Comment #1.”

Bon Iver ‘s Justin Vernon will be featured elsewhere on Kanye’s new album. Back in August, West unveiled his collaboration with Vernon (plus Jay-Z, Rick Ross and Nicki Minaj) on the track “Monster.” West is posting a new track each week — which he’s dubbing GOOD Fridays — leading up to the record’s release.

In related news, West also appears with Santigold, Vampire Weekend, and Pharrell in the new video “Barbra Streisand” by hip-hop duo Duck Sauce, a side-project by West’s DJ A-Trak and Armand Van Helden. Check out the clip to the banging dance track here.