The pop singer's skit with Elmo is canceled after negative viewer feedback. But what do you think? 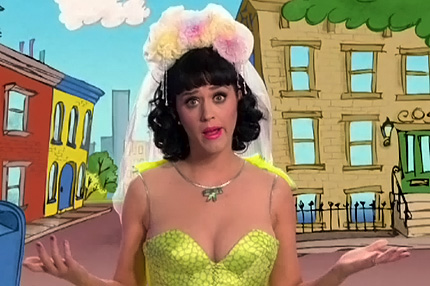 She kissed a girl (and liked it), shot whipped cream from her breasts, and now Katy Perry has reached the pinnacle of provocative: She’s too sexy for Sesame Street. Or is she?

On Thursday, just three days after footage of Perry singing a censored version of her hit “Hot ‘n Cold” on Sesame Street leaked online (watch below!), officials for the long-running children’s show pulled the plug on her skit, which was set to air later this year. Why? Negative viewer feedback, said a spokesperson for the series.

“Sesame Street has always been written on two levels, for the child and adult,” read the statement. “We use parodies and celebrity segments to interest adults in the show because we know that a child learns best when co-viewing with a parent or care-giver. We also value our viewers’ opinions, and particularly those of parents. In light of the feedback we’ve received on the Katy Perry music video, which was released on YouTube only, we have decided we will not air the segment on the television broadcast of Sesame Street, which is aimed at preschoolers.” [Via Us Weekly]

The clip shows the 24-year-old pop star dressed in a low-cut, heart-shaped dress, singing a duet and playing with Elmo. Since the clip leaked on Monday, YouTube viewers have been butting heads.

“You can practically see her tits,” wrote one. “That’s some wonderful children’s programming.”

“Women have breasts, children know this; it was never a secret,” wrote another. “The idea that anyone could find this offensive is disturbing.”

What do you think: Is Katy Perry a Sesame Streetwalker, or is she wrongly targeted for her curvy figure? Watch the video below, then sound off in the comment section.