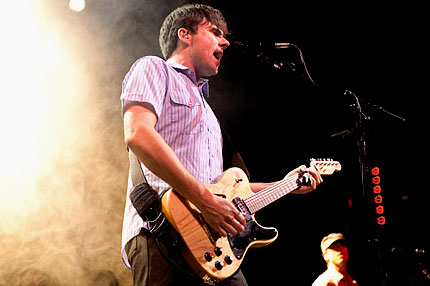 Although they’re credited as emo godfathers, the Tempe,AZ four-piece Jimmy Eat World have spent the better part of the lastdecade carving out a space on modern rock radio playlists for amiable,straightforward power-pop unencumbered by gimmicks, trends, or larger-than-life personalities. Their successes are real: A roll-call ofinstantly recognizable radio hits, a few gold albums and the abilityto sell-out the opening date of their new tour at an 1100-capacityvenue despite the fact that probably not more than a few dozenticketholders would’ve recognized the band’s frontman Jim Adkins hadhe been standing next to them in the beer line five minutes beforeshow time.

Adkins, dressed in a light blue, short-sleeve button downand wielding a guitar, kicked off the night stomping his right foot intime with drummer Zach Lind’s insistent bass drum to introduce “MyBest Theory,” the lead single from the band’s upcoming album, Invented(due out Sept. 28th). The song is a reasonably welcome if unsurprisingaddition to the Jimmy Eat World catalog: Punchy guitar riffs, drivingrhythm and a buzzy synth line courtesy of keyboardist/vocalistCourtney Marie Andrews, who augmented the band’s regulars –guitarist Tom Linton and bassist Rick Burch — on all the newsongs and a few of the old ones. (She also appears on five songs onInvented.)

The worst thing you could say about a Jimmy Eat Worldshow is that it’s not much to look at. The stage set was pretty basic–colored strobes bouncing around in front of a black backdrop scatteredwith the band’s name written in white and blue — but not without itsopening night snafus anyway. A heavy-handed fog machine operatorinsured that all but Adkins were shrouded behind thick mist for thesecond two songs of the set — a rousing version of “Bleed American” andthe moody “Your New Aesthetic” from the band’s 1999 album Clarity–unless, of course, that was the intention.

The other new songs, particularly the yearning, dynamic “Movielike”and the crunching rocker “Coffee and Cigarettes,” were evidence of theband’s undimmed capacity for churning out relentlessly infectioushooks, and Andrews’ presence, providing both keyboards and sugarybacking vocals, only helps in that department. But stripped of theirstudio sheen, tunes like “Let It Happen” and “Big Casino,” from JEW’slast album, 2007’s Chase This Light, felt a little flat, and the banddoesn’t really have the onstage charisma to make up the difference.

When Adkins began pointing at the audience to drive home the chorus of”Futures,” the affect was less intense than comic; watching him putdown his guitar and bounce awkwardly (or was that meant to bedancing?) while playing a glockenspiel during an extended instrumentalbreakdown on the set-closing “Goodbye Sky Harbor” was downrightuncomfortable to behold.

Fortunately, when the band returned for a four-songencore they regained their footing. As they tore into “Sweetness” tofinish the show, Adkins howled the lyric, “Sing it back!” and theaudience did as instructed chanting, “Whoaohohoh!” while pogo-ingalong enthusiastically, a reminder that if you can craft tunes thiscatchy, you don’t need much of a stage show to get over.

Setlist:
“My Best Theory”
“Bleed American”
“Your New Aesthetic”
“A Praise Chorus”
“Let It Happen”
“Work”
“For Me This Is Heaven”
“Futures”
“Big Casino”
“Dizzy”
“Coffee and Cigarettes”
“Movielike”
“Hear You Me”
“Evidence”
“Goodbye Sky Harbor”
“23”
“Pain”
“The Middle”
“Sweetness”

David Peisner
Tags: Jimmy Eat World, We Were There