Jay-Z and Eminem in NYC: “Illest” Show Ever 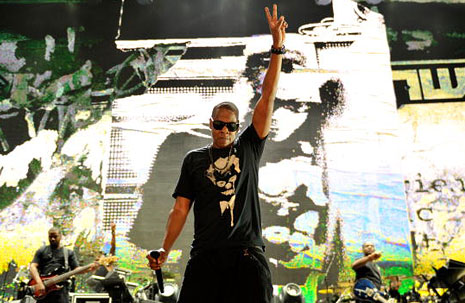 New York and Detroit aren’t exactly sister cities. And that fact was brought into stark relief at Monday’s Yankee Stadium opener of Jay-Z and Eminem’s “Home and Home” concert series — a triumphal spectacle in front of 50,000-plus headlined by Hova with a cortege of guests, answering September 2’s Comerica Park date with Em topping the bill.

In the 30-plus years since hip-hop’s birth in the Bronx (not far from the abovementioned Luxury Recreational Facility That Derek Jeter Built, which now looms over the previous park’s ruins), Detroit has gone from decline to desolation, while New York has left blighted neglect for gentrified empowerment. And perhaps as a result, the cities have produced polar-opposite hip-hop legends — Jay-Z, an African-American potentate who’s not forgotten the rags but prefers to envision riches; and Eminem, a grim, white survivor who keeps his rags close, threatening to douse ‘em and torch the place if anybody dares dishonor him or his fam.

Their performances — with colossal stage sets, mesmerizingly arty videos, a vast array of backing musicians, and fireworks (literally, shot out of the outfield bleachers at the close of Em’s set) — were more like epic arguments for how to engage with the world. Maybe that’s overstating it, or maybe I’m still bleary from G-Unit’s Gucci jackets and vests that lit up like a thuggish Tron. But the morning after the show, which stretched to at least six hours with subway rides and intermission, it was hard not to be awestruck by how these monied icons, both hovering near 40 years old, desperately wanted us to understand their journeys.

Whether you love or admire or respect them from a distance, Jay-Z and Eminem were remarkably, at times exhaustingly, serious artists sweating out their lives in vivid detail on a Jumbotron canvas. The next generation of stars, many of whom were in attendance, inevitably will struggle not to seem pixilated and daunted by comparison.

THE ROCK IS IN THE BUILDING
Both performers leaned heavily on metal-tinged rock guitar. Eminem opened with the defiant, off-to-war gut-punch “Won’t Back Down,” which was driven by a barrage of squealing riffs, while “Cleaning Out My Closet” and “Lose Yourself,” driven by the fist pumps of the white-boy-wasted faithful, were practically ’70s-longhair anthems for all the wailing axe theatrics. For his part, Jay-Z took the stage to Nirvana’s “Smells Like Teen Spirit” and turned “U Don’t Know” and “99 Problems” into blaring throwdowns that reached hardcore pit-thrash ferocity.

SOOOOO HAPPY TO BE HERE
Eminem’s guests were an excitable bunch who clearly relished their stage time. B.o.B bounded around like an ADD kid at recess for a remix of his Hayley Williams duet “Airplanes,” with Em’s searing verse namechecking his own (daughter) Hailie. 50 Cent and crew stormed out for a mini-set of “Patiently Waiting,” “I Get Money,” “Beamer Benz or Bentley,” and “In Da Club,” giving the proceedings a necessary jolt of pointless, carefree bluster. As did D12, who huffed and puffed through the not-as-lame-as-you-remember “My Band” and “Purple Pills.” And oh yeah, a beatific Dr. Dre strolled on for “Still D.R.E.” and “Nuthin’ But a ‘G’ Thang.” Then Em yelled something about Detox; Dre’s smile strained.

THIS ONE’S FOR THE LADIES?
“Love the Way You Lie,” Eminem’s recorded duet with Rihanna about an abusive relationship, has to be the weirdest gendered singalong ever. Hype man Denaun Porter shouted, “Come on, ladies!” and the female fans complied, shouting, “Just gonna stand there / And watch me burn / But that’s alright / Because I like ?the way it hurts,” while the violent video flashed behind the band. Hopefully, we can all leave such codepedence behind and move on to a happier and healthier call-and-response in the future.

THEY SAID WHUT?
One of the evening’s more entertaining sidelights was watching the (attempted) lyrical scroll on the mezzanine-level scoreboards. They were always a couple of lines behind and sometimes just glitched out completely. On “Love the Way You Lie,” the questioning phrase “Dysfunctional Relationship?” oddly stayed up for quite awhile, and at one point during a Jay-Z speed rap, the word “Ni***” simply froze.

PROUD PAPA ACKNOWLEDGES PROGENY
After a brief solo intro, the first five songs of Jay-Z’s set were basically a showcase for Kanye West to flaunt his fluorescent red blazer and ginormous Horus chain (that’s an Egyptian deity, fool!), while ripping the night sky with remix versions of new tracks “Power” and “Monster” (which also featured an appearance by Nicki Minaj, who suffered mic problems, and continued to experience an M.I.A.-like swoon on the heels of her VMAs fiasco with minstrel maven will.i.am). “Good Life” was an absurdly festive affirmation, to the point that Kanye’s voice almost seemed to be cracking with gratitude. It wasn’t a passing of the torch, but for this celebratory interlude, Jay seemed to admit that he and Yeezy were not only peers but equals — of course, it was still Hov’s mic.

IT WAS ALL A DREAM…
At this point, Jay-Z no longer has to do tributes to his late friend and rival the Notorious B.I.G., but the fact that he still does, at length, and with real emotion, even playing “Juicy” in its entirety so the crowd can sing along, is truly impressive (though he did shout “Peace to the World Trade” during a certain line that now seems untoward). In “Heart of the City (Ain’t No Love),” he spit the line “My nigga Big predicted the shit exactly” with an extra emphasis, as if to say that he couldn’t experience a night like this without hearing Biggie’s words echo.

CHRIS MARTIN, STARRING AS JAY-Z’S WHITE FRIEND
Singing the twee-est chorus of “Heart of the City” ever (a cappella!), tinkling “Clocks” on piano while Jay rapped the lyrics to the remix of Coldplay’s “Lost,” then launching into “Viva La Vida,” Chris Martin played his role with perfectly geeky resolve. A wonderfully talented white friend to have indeed!

DRAKE, STARRING AS JAY-Z’S BIRACIAL BUDDY
Drizzy Drake’s boundlessly sincere desire to prove to the fellas (the ladies could care less) that he’s not just a teen-TV pussy pushes him to be perhaps the most intently professional performer in hip-hop after Jay-Z. The emotion in his voice is palpable, and he projects it with great nuance. On “Miss Me,” when he interjects, “I think you caught me in a moment,” his slick, savvy inflection caught us in a moment. As for “Light Up,” which Jay hijacks on record, he held his own, as the stadium glowed with a few actual lighters and tens of thousands of cell phones.

THE HOTTEST CHICK IN THE GAME
That would be Beyonce, whose voice was luminous, her minidress a glittery myth, her hair a bounty of relaxed lusciousness, and her lip gloss a shimmering pool more dangerous than Narcissus’. Singing the chorus of the execrable goofest “Young Forever,” she made it seem like the gloriously tear-filled prom theme you always wanted. Lady Gaga may have a meat locker of VMAs, but she’ll never do this. You win again, Honey B. Or more to the point, Jay-Z wins again.

Charles Aaron
Tags: eminem, jay-z, We Were There