It took an early failure for Jamey Johnson to find success. Now, the man responsible for the year's rawest, roughest, and best country album is determined to keep doing things his way -- whether Nashville likes it or not. 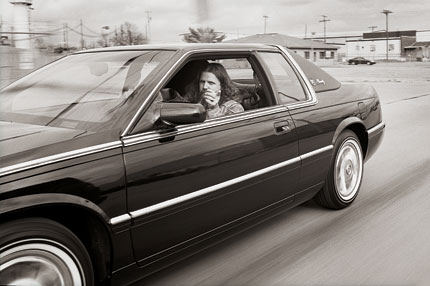 It took an early failure for Jamey Johnson to find success. Now, the man responsible for the year’s rawest, roughest, and best country album is determined to keep doing things his way — whether Nashville likes it or not. [Magazine Excerpt]

On a sunny afternoon in late July, the concourse of the state fairgrounds in Harrington, Delaware, is lined with red, white, and blue booths manned by texting teens selling suspiciously uniform slices of homemade apple pie. Prize-winning goats, sheep, and cows idle in the nearby livestock pavilion. A baby-faced serviceman stands under a tent, passing out recruiting pamphlets for the National Guard: Always ready, always there. Next to him, a plywood enclosure houses Tiny Tina, the little lady from Haiti, “the world’s smallest woman” — a buck a look. Past the midway attractions, inside a midsize tour bus parked on the grass infield of the horse track that doubles as the fair’s concert venue, a jittery guitar player with long red hair is raving about a country singer he swears is the truth.

“Nashville’s full of what I like to call ‘insert singer here’ music,’?” says the man, Wayd Battle. “Sounds fine on the radio; doesn’t touch hearts. Jamey’s not like that.” Battle is referring to his boss, Jamey Johnson, who is still en route to the spot where he’s scheduled to open for whatever is calling itself Lynyrd Skynyrd these days. “You know his new one’s a double album, right? Name another country double. You can’t. It’s wrong. He doesn’t let people Pro Tool his songs to death. That’s wrong. No Auto-Tuned twang either. Wrong. The wronger he keeps doing it, the better off he’ll be.”

The 35-year-old Battle holds an unlit cigarette while unwrapping the latest in a series of Reese’s Peanut Butter Cups. “Not a day goes by, not one day, where someone doesn’t tell us” — he bows his head and thrusts an index finger in the direction of the band’s road manager. “What do they say, Darryl?”

The Fifth Track on the second disc of Jamey Johnson’s new The Guitar Song is a slowly unfurling beauty of confessional songwriting called “That’s Why I Write Songs.” Over fingerpicked acoustic guitar chords, the native of Enterprise, Alabama, sings in a sympathetic baritone: “You’ve been through it and so have I / And that’s why I write songs.” It seems simple. It’s been anything but.

“I’ve had to fight for my freedom,” says Johnson, seated behind a small table on his own bus, its beige interior decorated only with strings of white Christmas lights hung from the ceiling, currently parked in the lot of a Hardee’s, two hours before showtime. Shoulder-length brown hair and a six-inch-long goatee make him look older than his 35 years. His blonde and blue-eyed six-year-old daughter plays on the floor with Hank, a brindle pit bull–Lab mix. “I learned the hard way what happens when you listen to people who don’t have your music’s best intentions in mind. I won’t work for anyone again. With someone,” he says, “but not for someone.”

He won’t have to test that rule anytime soon — 2008’s That Lonesome Song, a redemptive concept album about a singer’s travails, has sold 793,000 copies and earned a Grammy nomination for Best Country Album. The single “In Color,” a stirring mash note to the greatest generation, won Song of the Year from both the 2009 Academy of Country Music and Country Music Association, its unaffected grace standing out from the well-groomed, nonthreatening competition like a rodeo bull in a pen full of dairy cattle.

“When I first heard Lonesome Song and ‘In Color,’?” says Kid Rock, who has covered the song live, “it was obvious that Jamey’s music was coming from a real guy, not a machine. Nashville usually pumps out formula, and Jamey wasn’t that.”

The Guitar Song is an ambitious, idiosyncratic step forward. Divided into “Black” and “White” discs, the album’s 25 tracks confirm Johnson’s allegiance to his country-music forefathers — and respectfully leave them in the dust. Faithful covers of songs by old-timers Hank Cochran and Mel Tillis sit comfortably near the soulful Southern rock of “Macon.” There are two songs about feeling out of place among California’s tofu eaters and high-dollar wine drinkers. (If the last album’s through line was the struggle to not fail, this one’s is the danger of success.) Most were recorded live in the studio with few embellishments. None sound focus-grouped or studio-shined. It’s an album to help rock listeners get down-home and country fans sharpen their edge.

“The Guitar Song is the kind of record people like Waylon Jennings and Merle Haggard used to make. It’ll appeal to people who like raw, honest music,” says Luke Lewis, who rode with the aforementioned outlaws back in the ’70s when he was a Nashville-based journalist and now heads Lost Highway (the label of Elvis Costello and Lucinda Williams) and Mercury Records, the latter of which signed Johnson in 2008. “The problem is country-radio programmers who might think Jamey isn’t what moms aged 25 to 54 who drive minivans want to hear.”