How They Became… Tegan and Sara

The Canadian identical twins tell SPIN.com why they changed their name from Plunk. 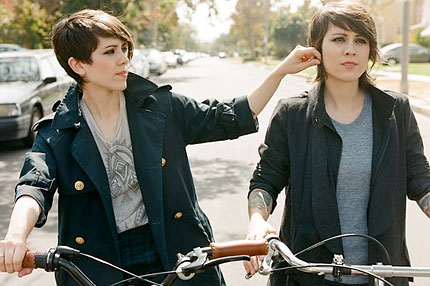 This week: Sara Quin, of Canadian indie pop duo Tegan and Sara, who are currently on tour.

Why Tegan & Sara: “The first version of the band,” recalls Sara, half of the identical twin-sister twosome, “rotated members in addition to Tegan and I and we were called Plunk. Basically, we thought we were a punk band, but without a rhythm section we were light punk: Plunk. After we got out of high school and were trying to play shows around Calgary, we started feeling that Plunk seemed like a silly name-a little lightweight. We knew we wanted to change it and decided to use our own names, thinking it would be a placeholder until we came up with something better. We never did. There’s a reason that it’s Tegan and Sara instead of Sara and Tegan, though. Ten years ago or so there were all these Sarahs in Canadian music. There was Sarah Harmer, Sarah McLachlan, and Sarah Slean. We thought people would pay more attention to us if we put Tegan first.”

Previously Rejected Names: “A couple years ago we were rebelling against the image that because we were siblings we also must be rivals and thought it would be funny to change our name to Tegan Vs. Sara. That idea didn’t last very long.”

Best Band Names Ever: “I’m a sucker for ’80s and ’90s band names like Depeche Mode, the Smiths, and the Cure. I don’t know why, but they have a coolness to them. There’s something icy and removed and aloof that I find really appealing.”

Worst Band Name Ever: “There’s a bottomless pit of bad band names, but I’d rather not single any one out. They’ve suffered enough.”