How They Became… Margot & the Nuclear So and So’s 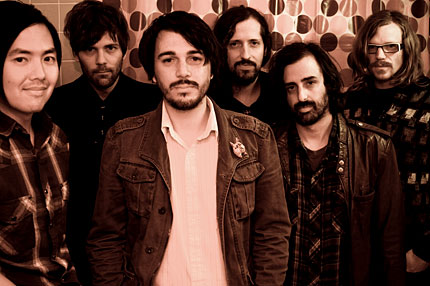 Welcome to the new weekly SPIN.com feature “Name That Band”; inwhich we get the inside stories behind the mysterious monikers of some ofour favorite artists. (See past episodes of Name That Band! here.)

This week: Richard Edwards of Margot & The Nuclear So and So’s, whose Buzzard is out September 21.

Why Margot & the Nuclear So and So’s: “I was driving to class at the University of Indiana in a minivan one the morning, around 9 or 10 a.m.” recalls frontman Richard Edwards, “and the name just popped into my head. I think it’s because I was in the middle of an obsession with Dr. Strangelove back in 2002, 2003 when the band started. I think that’s where the nuclear reference comes from. The full title of the movie is Dr. Strangelove or: How I Learned to Stop Worrying and Love the Bomb. So I had the idea of long titles in my head too. The rest of the band was pretty disappointed when I brought the name to them. Andy Fry, our old guitar player, thought it was too long. I agree with him.”

Previously Rejected Names: “There weren’t any other names. I was pretty forceful about Margot. There was no democracy. I did used to play in a band called Vegetables, though.”

Best Band Names Ever: “There’s a band from Chicago called Baby Teeth. I don’t know their music but they’ve got a great name. I wish I’d thought of it. Weezer is a kick-ass name, too. “

David Marchese
Tags: Margot & The Nuclear So and So’s, Spotlight