Cast unveils anthemic tune "Boy Falls from the Sky." Plus: Bono checks in from U2's 360 Tour. 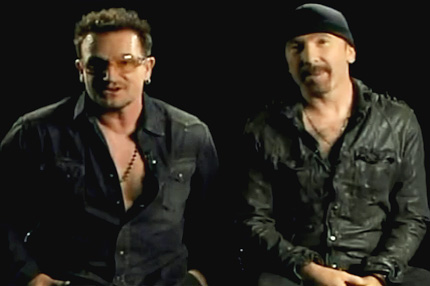 Bono and the Edge’s Spider-Man musical won’t hit Broadway until December but the U2 members offered a better glimpse of their new material this morning on Good Morning America. Castmember Reeve Carney-who plays Peter Parker in the musical-performed “Boy Falls from the Sky” with his band. Not surprisingly, the song sounds like trademark U2-chiming guitar riffs, arena-rock drums, a quiet verse that escalates into a bombastic chorus-although Carney, who sings in a raspy tenor, doesn’t quite match Bono’s high, soaring voice. (Check out the performance here.)

U2’s work on the play, which is directed by The Lion King’s Julie Taymor, has hit plenty of roadblocks since they announced the project in 2007. Spider-Man reportedly cost a whopping $50 million to make. Producers ran into financial troubles this past February, causing the play to postpone previews and forcing two of the play’s stars-Evan Rachel Wood as Mary Jane and Alan Cumming as the Green Goblin-to exit. (Both roles have been recast with actors Jennifer Damiano and Patrick Page.) But everything appears to be on track for the December premiere: Taymor revealed images of the elaborate set design on GMA, which include cityscapes modeled after a pop-up book.

U2, meanwhile, are in Europe on the U2 360° Tour, making up postponed dates after Bono underwent emergency back surgery in May. The band’s North American leg of the tour, in support of 2009’s No Line on the Horizon, kicks off on May 21st in Denver, CO. How’s Bono faring on the road? Dude’s a warrior. “I’m rebuilt by better design,” he told GMA. “I can’t believe I’m back.”