The singer breaks down secrets of his new T Bone Burnett-produced 'National Ransom.' 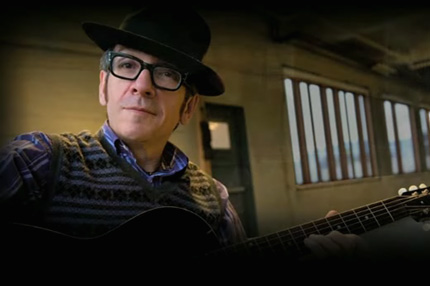 For his new disc National Ransom, Elvis Costello reteamed with iconic producer T Bone Burnett on a set of rootsy tunes that prove Costello is still making vital music thirty-three years after his landmark 1977 debut, My Aim Is True. In a new video interview, Costello breaks down the inspirations behind the songs, including standout “Jimmie Standing in the Rain,” which he says was inspired by an English cowboy who “stumbled from one indiscretion to the next.” Check out the clip below.

Costello’s new album — due November 2 — continues the country and roots influences he explored on last year’s Burnett-produced Secret, Profane & Sugarcane, but it doesn’t mean he’s lost any of his sneering punk attitude, especially on cuts like the title track, which you can stream below. Those far-out Farfisa organ stabs alone show the dude’s still got a “Pump it Up” or two left in him.