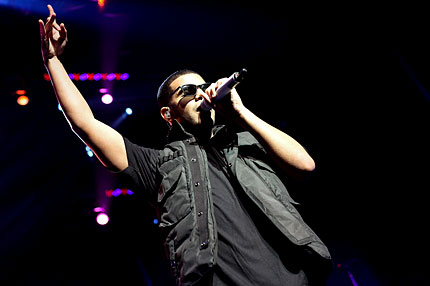 To paraphrase his own lyrics, Drake really is too young to be feeling so old. His current Light Dreams and Nightmares Tour opened last night at the James L. Knight Center in Miami, showcasing an artist who’s both reveling in his own swiftly acquired success, and musing on it, introspectively.

The Canadian-born rapper performed cuts off this year’s chart-topping Thank Me Later, many of which seem devoted to parsing the darker sides and heartbreak of mainstream acclaim. He didn’t shy away from any of that last night, spending a decent part of the evening bathed in blue spotlights and crooning most of the near-ballads from that record. Yet the throngs still partied along to songs like “Successful,” “Paris Morton Music,” and “Light Up,” despite their clear themes of loneliness and exhaustion.

That juxtaposition of glitz and reflection carried through the entire production, with a refreshingly straightforward set whose dressing was limited to a hanging orb lit to look like the moon and a few judiciously used lasers. There was no fancy choreography, no flashing screens, and just one sparingly used female backup singer. The only flamboyant touches were appropriate: fireworks during, well, “Fireworks,” and another little shower of pyro during the rousing show-closer “Over.”

That left the focus on Drake himself, and while some have criticized Drake’s relatively “soft” origins as an actor on the teen soap Degrassi, his acting experience serves him well. He’s clearly an entertainer, and knows when to play up those strengths.

Backed by a full backing band, which of course included a DJ, but also some virtuoso players like powerhouse mercenary bassist Adam Blackstone (who’s played with Usher, Jill Scott, and dozens more), Drake opened with the uptempo “9 A.M. in Dallas” and “Forever,” and was soon giving into his heartthrob status. Explaining he had recently moved to Miami to try to score U.S. residence, he hammed it up, repeating, to ever-louder shrieks, that he hoped to find the girl of his dreams there.

He also made sure to include the oldest heartthrob’s trick in the book, selecting a lucky lady to join him onstage after dropping his verse from Alicia Keys’ “Unthinkable.” Their interlude included a semi-awkward slow dance, but the fan got to leave the stage with a legitimately sexy kiss, and, in a bit of product placement, a Blackberry Torch, because “I rep AT&T all day,” Drake said. (The tour is sponsored by the wireless carrier.)

This wasn’t the only guest to appear last night, though. As expected, opening act Tyga, whose earlier set gave hints of superstar swagger, reappeared to duly perform his own verse on Drake’s “Bedrock.” Later, during Drake’s set, Cash Money label head Birdman (aka Baby) strolled out for a rendition of “Money to Blow” and some crowd-hyping to a DJ medley of recent Lil Wayne hits.

Still, in the end, all eyes were on Drake. He seemed dutifully humbled by the love, and made sure to shout-out both Lil Wayne and his mentors as well as up-and-comer peers J. Cole, Wiz Khalifa, Kid Cudi, Wale and fellow Young Money star Nicki Minaj. He proudly proclaimed himself and all of them part of a new class of rap. And considering the screams that followed him as he left the stage at the end of his 90-minute set, he’s may already be its valedictorian.

Setlist:
“9 A.M. in Dallas”
“Forever”
“Up All Night”
“Show Me a Good Time”
“The Resistance”
“Karaoke”
“Successful”
“Fireworks”
verse from Young Jeezy’s “Lose My Mind”
“Money to Blow” (with Birdman)
Lil Wayne tribute medley: “I’m Going In” / “Right Above It” / “Every Girl”
“Bed Rock” verses (with Tyga)
verse from Alicia Keys’ “Unthinkable”
“Shut it Down” / cover of B.o.B.’s “Nothing On You”
“Unforgettable”
“Light Up”
verse from Timbaland’s “Say Something”
“Miss Me”
“Best I Ever Had”
“Fancy”
“Find Your Love”
“Over”

Arielle Castillo
Tags: Drake, We Were There