Bang your head to "Out Again," off the band's just-released EP, Songs for Singles. 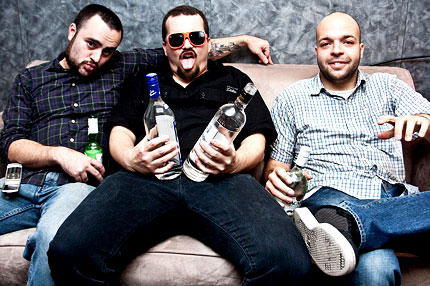 Since forming in 2004, Miami, Florida, trio Torche has won raves for their mixture of stoner metal riffage and poppy melody. On their EP Songs for Singles (out today), the guys have further refined their aesthetic — the closing track “Out Again” is six hypnotizing minutes of flowing heavy guitar and catchy vocals. Download it below!

“That song was written while jamming at practice after we had written the other songs on Songs for Singles,” explains bassist Jonathan Nunez, who cites Krautrockers Neu! and Austin, Texas, indie-rockers American Analog Set as inspiration for the track. “It just kinda happened — it’s a song that feels good when you play it.”

But not everyone dug hearing it, says Nunez. “One day my parents had company over, and these peoples’ son was sitting outside the room where [singer-guitarist] Steve [Brooks] and I were was singing. When Steve came out of the room after tracking, the little boy was giggling to himself. Then he said to Steve, ‘You sing terrible’ and ran off!”

Thankfully, the common reaction to “Out Again” has been far more positive. “We’re psyched,” says Nunez, “[the song] has become one of the tracks that people really like to hear.”

Find out why below.