Guitarist/producer says his band is treating their next album like a "construction project." 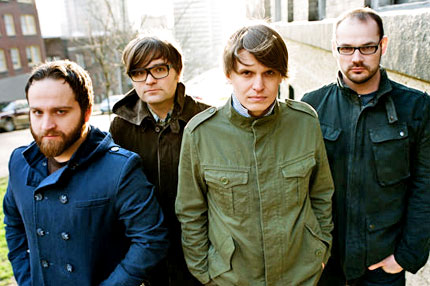 Over the last year, Chris Walla has focused on producing records for Seattle’s Telekinesis, indie-pop quartet Lonely Forest, and cutting a Led Zeppelin cover of “In the Evening” for the forthcoming compilation From the Land of Ice and Snow. Now, Walla will turn his attention to his main gig: Death Cab for Cutie.

The guitarist tells SPIN that they’ve already been working on ideas for their seventh record, which the band began writing and recording back in June. “We’re working in fits and starts,” he says. “It’s hard to say — we might be half done, we may not have started.”

For Death Cab’s last album Narrow Stairs, Walla, frontman Ben Gibbard, bassist Nick Harmer and drummer Jason McGerr took a relaxed approach to the sessions and the results were a loose, jammy collection of tunes. “With that one, it was live off the floor,” says Walla.

But Death Cab are getting way more ambitious for the next record, treating it more like “a construction project.” “We’re in the phase where songs could be so cool with just two acoustic guitars or they could be really good with sequencers,” says Walla. “We’re trying on all the outfits with the songs.”

Walla — who will also be producing the album — adds that the band isn’t in any rush to get out a new record, although Gibbard has estimated it would be out sometime in early 2011. “We’ve got enough time this time and we’re way just into exploring these possibilities rather than going with our gut,” he says. “We’ve ended up with some cool stuff. It’s been fun so far.”