The "Nothin' On You" songwriter was allegedly found in a Las Vegas bathroom with narcotics over the weekend. 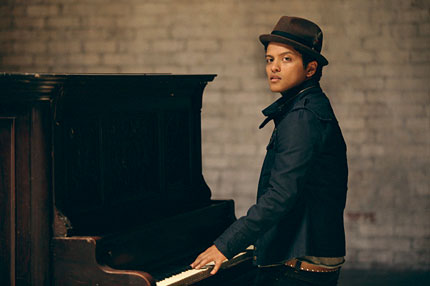 Bruno Mars, the pop crooner best known for co-writing and singing the hook on B.o.B.’s “Nothin’ On You” and Travie McCoy’s “Billionaire,” was arrested early Sunday morning in Las Vegas on suspicion of drug possession.

According to the Las Vegas Journal-Review, the 23-year-old Mars, born Peter Gene Hernandez, was arrested at 2:40 A.M., after security at the Hard Rock Hotel and Casino confronted him in a bathroom and allegedly found him to be in possession of narcotics.

Police Sgt. John Sheahan told the newspaper that he did not know what drug or drugs Mars possessed. At press time, a spokesperson for Mars had not returned request for comment.

The arrest comes as Mars’ popularity is skyrocketing. Both “Billionaire” (watch an exclusive acoustic performance here!) and “Nothin’ On You” breached the Top 5 on the Billboard Hot 100 singles chart, with the latter holding the No. 1 spot for two weeks.

Mars, whose own “Just the Way You Are” was also a chart smash, recently joined B.o.B. onstage at the MTV VMAs to sing their mega-hit, and he recently played his first-ever headline gig in New York. “Mars proved to be nearly as good a performer as he is a songwriter,” SPIN wrote of the show.