The 15 Best Shows of the Summer 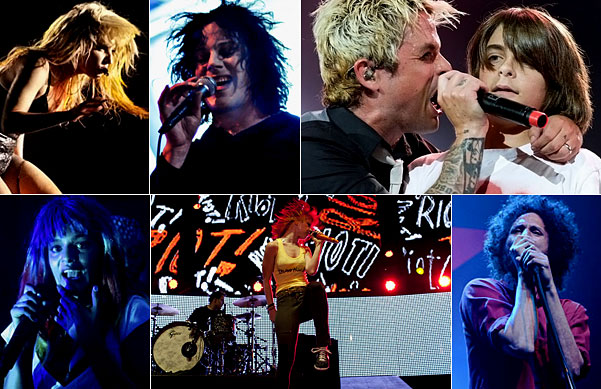 It's tough to admit, but as our farmer-tans fade there's no denying it: The sun has nearly set on summer 2010. Here, SPIN revisits the best live moments of the season, from Lady Gaga's crowning at Lollapalooza to Killers frontman Brandon Flowers' debut solo gig, plus everything in between, including the Dead Weather, Green Day, Paramore, Rage Against the Machine, and M.I.A.

Check out the 15 most memorable sets in our gallery, then look ahead to an autumn full of equally awesome gig with SPIN's Fall Tour Preview. —William Goodman

It's tough to admit, but as our farmer-tans fade there's no denying it: The sun has nearly set on summer 2010. Here, SPIN revisits the best live moments of the season, from Lady Gaga's crowning at Lollapalooza to Killers frontman Brandon Flowers' debut solo gig, plus everything in between, including the Dead Weather, Green Day, Paramore, Rage Against the Machine, and M.I.A.

Check out the 15 most memorable sets in our gallery, then look ahead to an autumn full of equally awesome gig with SPIN's Fall Tour Preview. —William Goodman 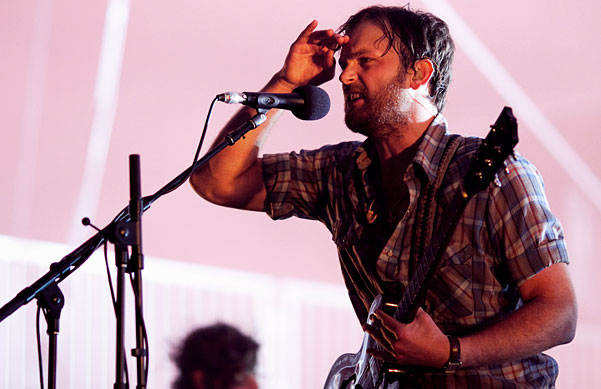 Since playing a sidestage at Bonnaroo in 2004, Tennessee's native sons have become rock royalty with a Top 10 album (Only by the Night) and and Grammy-winning single "Use Somebody." Fittingly, for their triumphant 2010 homecoming, the Followills celebrated with a "colossal spectacle," wrote SPIN's Charles Aaron. "The band entered to thunderous choral music while plumes of black smoke emanated from all over the venue, backed by a dazzling, skyscraper-size matrix of lights." But the theatrics didn't overshadow the tunes: "The real highlight was a clutch of new, as-yet-untitled songs that boasted a rootsier, possibly even more ambitious aesthetic." 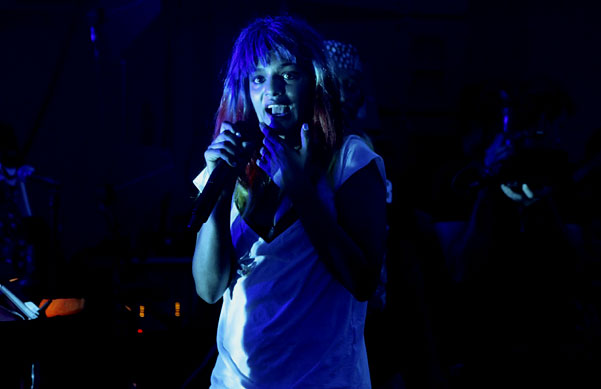 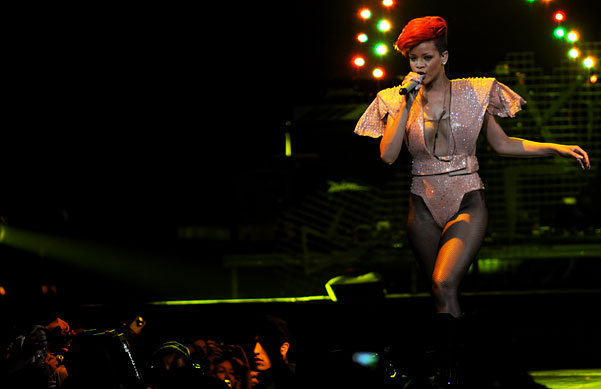 The opening date of Rihanna's North American "Last Girl on Earth" tour, featuring openers Ke$ha and Travie McCoy, "was nothing less than a full-on, wickedly entertaining spectacle," wrote SPIN's Mike Usinger. Rihanna rode the giant gun of a life-size army tank, gyrating until the inevitable explosion; she drove a '57 Cadillac that looked salvaged from a Havana junkyard; she reclined on a giant sled made up of chrome-dipped mannequin parts; and she even displayed some crazy drum-solo skills. "As far as the screaming throngs were concerned, this was a night where she could do no wrong." 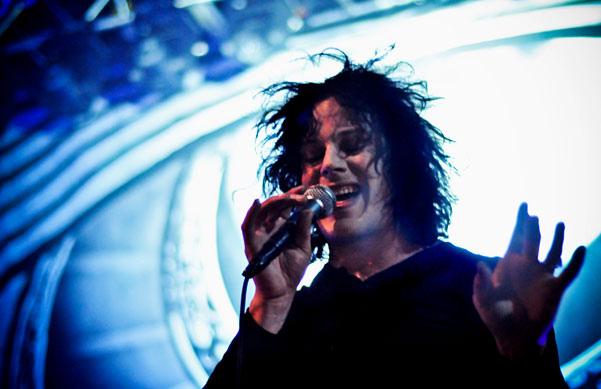 The Jack White-led supergroup kicked off their summer tour with a 75-minute set that "was a full-on pagan rock'n'roll ritual," wrote SPIN's Michael Byrne. "Onstage, four stuffed goat's heads were mounted on the Dead Weather's lighting gear, staring out at the sold-out room. A giant glowing eye, a trick of painted curtain and clever light, peered down at the room from near the rafters. Smoke hissed out from sidestage, hanging a milky haze through the crowd." White shredded goth blues licks and singer Alison Mosshart "became a twirling demon—arguably rock's most compelling frontwomen." 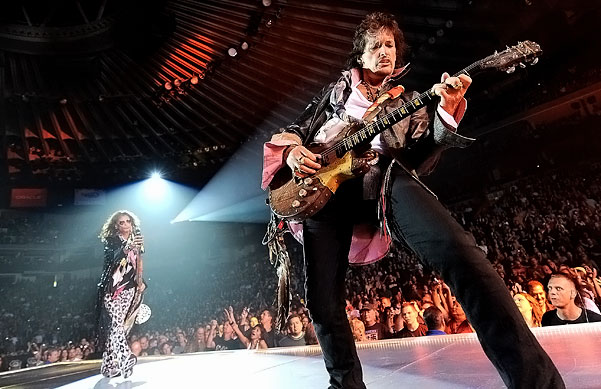 It has been the most tumultuous period in the Boston band's four-decade-long history: Steven Tyler broke his hip onstage, got hooked on painkillers, nearly quit up the quintet (who subsequently tried to replace him), attempted to sue his band mates, then went to rehab. But Aerosmith patched things up and returned, "Cocked, Locked, and Ready to Rock" at the opening date of their U.S. tour. Tyler—covered in sequins, paint-on black & white leopard skin bell bottoms, aviator shades, and fedora hat at a cocky tilt—"sounded remarkably strong, still hitting the big notes," wrote SPIN's Aaron Kayce."After the unstoppable triple encore of classic-rock gold 'Dream On,' 'Walk This Way,' and 'Toys In The Attic,' it seemed entirely possible they could continue for another decade." 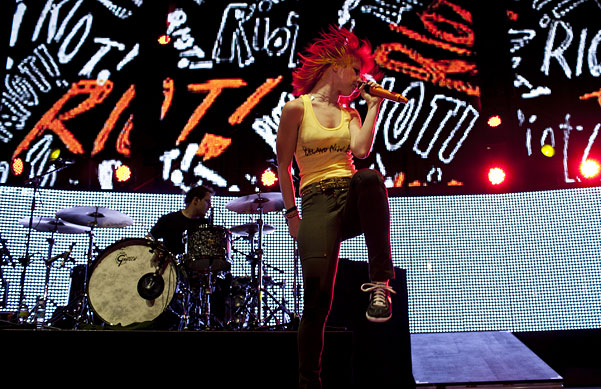 When Tennessee pop-punks Paramore, fronted by the feisty Hayley Williams, kicked off the two-month Honda Civic Tour with support from Canadian sister act Tegan and Sara, the five youngsters reminded just why they've "ascended from the Warped Tour stage to become one of the country's biggest musical draws," wrote SPIN's Grayson Currin. During "Born for This," the second song of their hits-filled, 90-minute set, Williams "leapt up on a monitor, red hair flying, and sang, 'Tell me, tell me, do you feel the pressure?' In unison, the sold-out, 5,000- crowd answered: 'We were born for this!'" Paramore certainly were, too.

9. RAGE AGAINST THE MACHINE 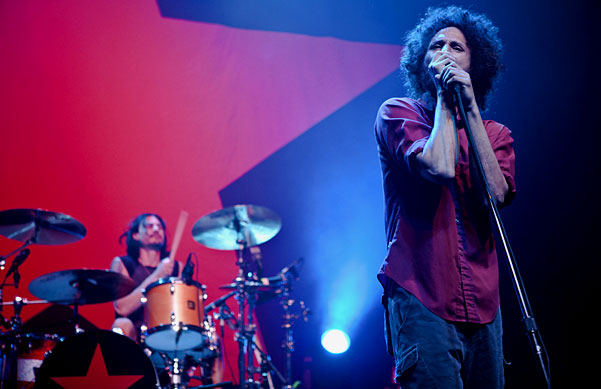 At their first hometown Los Angeles concert in more than a decade, the hard hitting rap-rock outfit did what they do best: Fight the power. Singer Zack De La Rocha called Arizona's controversial SB-1070 immigration law "racist" and "divisive." On "Guerilla Radio," his lyrics took on new meaning. "What better time than here," he pleaded. "What better time than now." "De La Rocha's and the band's conviction was so authentic, so impassioned, and the audience's response so vocal, it gave hope to those who believe music can make a difference in politics," wrote SPIN's Charlie Amter. 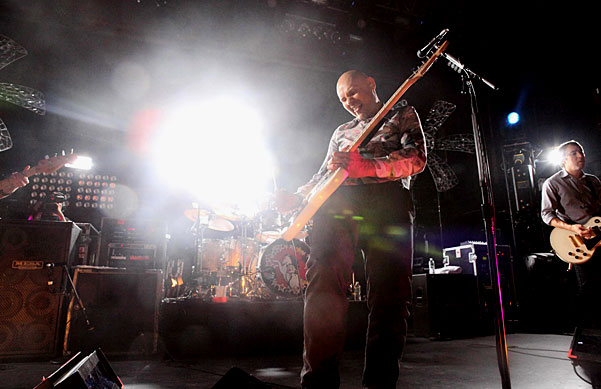 SPIN celebrated its 25 anniversary in grand style—with five nights of concerts from the artists integral to the magazine's history: Smashing Pumpkins, Flaming Lips, the National, Black Keys, and Spiritualized. The Pumpkins, touring for the first time with their new lineup, kicked off the party with a 135-minute set that delivered on Billy Corgan's promise to "kick your ass harder than anybody else." The Lips provided a confetti-filled reminder of why they remain "one of rock's most thrilling, most inventive—most euphoric—live acts." Black Keys gave a sinister "lesson on the enduring power of the blues." the National's shaman-like leader Matt Berninger entranced with crowd with his "breathtaking confidence." Spiritualized closed the week with a 30-member (orchestra, horns, choir) performance of their landmark release, 1997's psych-soul epic Ladies and Gentlemen, We Are Floating in Space, which SPIN music editor Charles Aaron described as bordering on an "extended meditation." Here's to another 25! 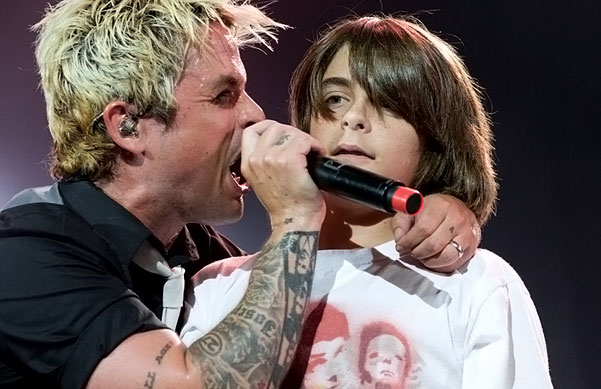 "You guys spent your hard-earned money tonight, so we're gonna give you the best show you've ever seen!" Billie Joe Armstrong shouted to a near-capacity crowd of 24,000 at the opening night of the punk band's summer trek. He wasn't kidding. "Green Day hit the stage as if they were shot from a cannon, sprinting around in a show of energy that would rarely let up as the evening progressed," SPIN's Michael Alan Goldberg wrote of the marathon three-hour, career-spanning spectacle. 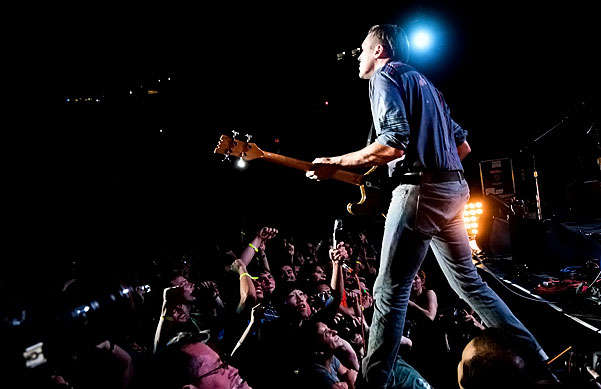 To celebrate the early-August release of their third album, The Suburbs, the Montreal collective took indie to the throne of arena rock: New York City's Madison Square Garden. How'd the fiercely independent, DIY band fare? "Any doubts that Arcade Fire were not born for this disappeared," SPIN's Steve Kandell wrote of the 17-song set."From the onstage frenzy of watching seven (at least) members rapturously attack, then swap, instruments to the barely-containable songs themselves, they were bigger than any room they'd play." 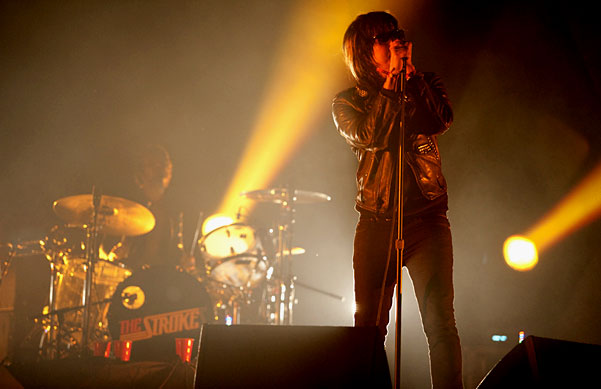 After a four-year break, the New York boys made their grand return at Grant Park with a no-filler 16-song set that "served to remind that the Strokes were, and are, a pretty simple and effective and successful rock band, an increasingly rare commodity," wrote SPIN's Steve Kandell. Julian Casablancas and Co. refrained from playing new material from their upcoming release, instead focusing on their first two records. "Though some may have dismissed Is This It? at the time as derivative, or dismissed the band as poseur clotheshorses, a decade later, they don't quite sound like anything that's come before or since." 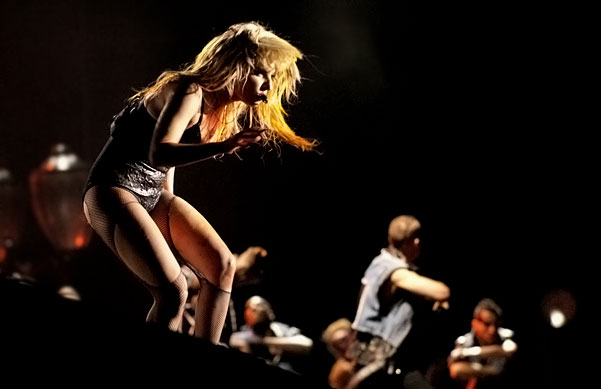 Three years after a then-unknown Lady Gaga performed on side-stage set at Lollapalooza to an uncomprehending crowd, she commanded more than 50,000 fans on the fest's 2010 opening night and she did it in her own freaky way—"and that's really freaky," SPIN's William Goodman wrote. The 24-year-old singer shouted, "I have a ginormous dick!" and "Get your fucking cocks out!" feigned masturbation onstage, humped the floor while covered in fake blood, and shot sparklers from her crotch. The crowd lapped it up: On "Bad Romance" nearly everyone "raised their claws and mimicked the zombie-esque dance depicted in the song's video." "The Monster Ball will set you free," she said. Indeed. 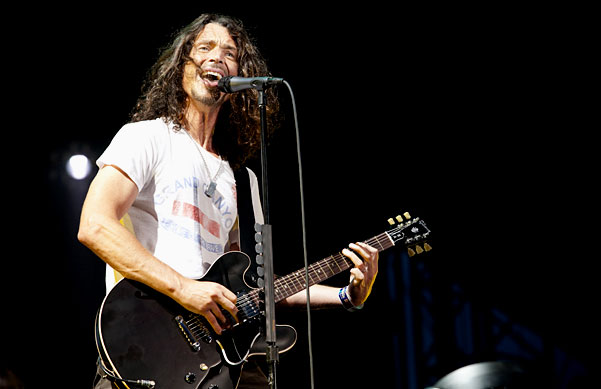 The Seattle grunge pioneers' first rehearsal gigs (a hometown show in April, and a pre-Lolla set at Chicago's Vic Theatre) were a bit creaky. But when Chris Cornell and Co. thundered onstage at Grant Park for their first "official" show in 13 years, it was like 1992 all over again: "The entire band looked, and sounded, more or less as we left them," wrote SPIN's Steve Kandell. Their sound was still just are vital: "Soundgarden have always been good at big—even their ballads are apocalyptic epics perfectly unsuited to lighter-waving," he wrote. "These guys just may have a chance to make it all over again."

16. QUEENS OF THE STONE AGE 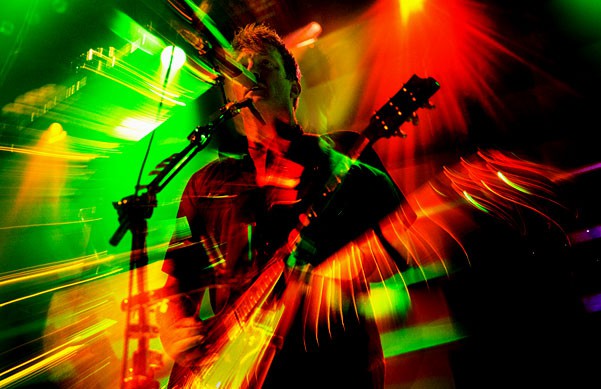 "We are gonna call upon the power and fury of rock and roll to heal our friend!" Jesse Hughes, the mulleted and mustachioed frontman for Eagles of Death Metal, declared. "Can you dig it?" A crowd of metal heads, stoners, and hard rock aficionados certainly did, and so did Queens of the Stone Age, led by Josh Homme (left), who played their first show since 2008 to help raise money for cancer-stricken EODM bassist Brian O'Connor. O'Connor's friends showed their support: the Last Shadow Puppets performed, and ex-Screaming Trees leader Mark Lanegan even joined QOTSA for a heavy, unerringly precise set. "If rock'n'roll actually does have the power to destroy or to heal, or whatever, cancer would have been lucky to leave that place with only a limp," wrote SPIN's Chris Martins. 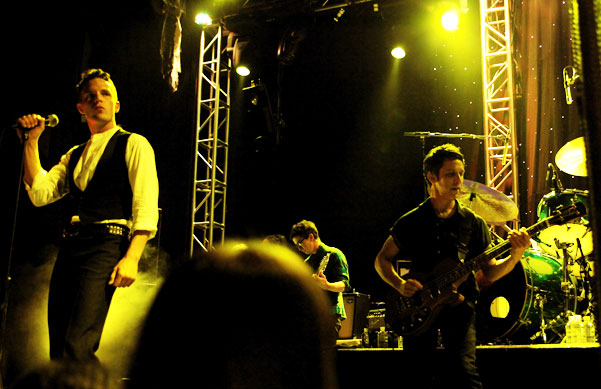 At his first hometown solo show, the Killers frontman performed most of his upcoming record, Flamingo, an homage to Las Vegas. He fittingly chose a casino to perform in, surrounded by framed black and white photos of Elvis Presley. During his 10-song, 45-minute set, Flowers "held little back, smiling wide, pistoning himself up and down, gesticulating as he sang," SPIN's Jason Bracelin wrote. The show climaxed with the bluesy torch song "Playing With Fire," and "as the song built momentum, Flowers became increasingly animated, climbing atop a stage monitor, fists clenched, punching the air. 'I've got this burning belief in salvation and love,' he sang, its flames rivaled by the fire in his belly."