See the Thin White Duke singing "Hurt" with the industrial rockers on their famed 1995 co-headlining tour. 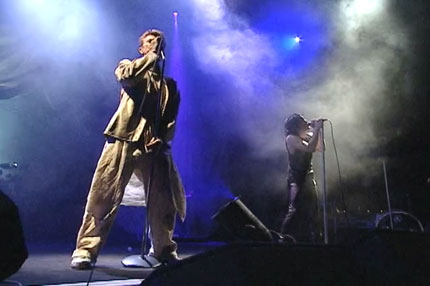 David Bowie’s 1995 co-headlining tour with Nine Inch Nails was a monumental one, a great double-bill that featured an onstage collaboration every night between both acts. Now a handful of soundboard quality, professionally-shot videos from the tour have emerged online. Watch their performance of NIN’s epic “Hurt” below!

The four videos were uploaded by film editor David Williams earlier this summer, and were posted recently on a site called Slicing Up Eyeballs by The NIN Hotline.

Each night of the tour, Reznor and Co. would perform a full set. Then Bowie and his bandmates joined them to play a selection of songs by both artists before segueing into a full set by Aladdin Sane himself.The Bowie-Reznor duet on The Downard Spiral’s “Hurt” became a near-nightly occurrence, a regular instance of one rock legend anointing a newer hero.

At the time, though, a SPIN review of the tour’s Massachusetts stop suggested that the collaboration might have served another purpose: “Did someone fear [NIN]’s departure [from the stage] might leave a bleeding wound in the crowd?” Eric Weisbard wrote in the December 1995 issue.

Still, the high quality video of “Hurt” is the highlight of these just-unearthed clips, which are mandatory viewing for all rock fans.

Tell us what you think of the video in the comments section. And scroll down to read SPIN’s 1995 review of the tour. Check out three more clips here.