After a three-week hiatus, the quartet return with true vigor and without a trace of rust. 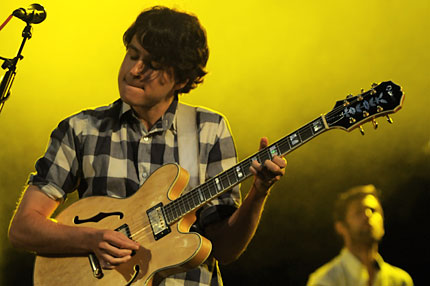 Halfway through Vampire Weekend’s Friday night set at Vancouver’s Malkin Bowl, singer-guitarist Ezra Koenig made a surprising confession: The group had a mild case of the jitters.

The reason? According to the well-mannered, Topsiders-sporting frontman, he and his bandmates had just come off a three-week break. The men of Vampire Weekend evidently keep up a work schedule that’s never going to get them pegged as slackers, and the time off seemed like an eternity to them.

Having been away from each other for a while, the New Yorkers were worried that the kick-off show of their current North American tour would find them sounding rusty.

Sorry, but nothing doing. Right from the set-opening “Holiday,” the band came off as a well-oiled, firing-on-all-pistons machine. Playing an open-air venue in Vancouver’s heavily treed Stanley Park, Vampire Weekend didn’t exactly blow the bank on staging. All you got was a bargain-basement light rig and four guys who looked like they do their shopping at Old Navy.

Instead, Koenig, bassist Chris Baio, drummer Chris Tomson, and guitarist Rostam Batmanglij pretty much let the music do the talking. And right from the moment they first bounded out, Vancouver was on board, the crowd busting its best moves during “California English” and belting out en masse the chorus to “M79.”

Surprisingly, Vampire Weekend was heavier than it sounds on its self-titled debut, and the recently released Contra, unleashing sprays of machine-gun punk during “One (Blake’s Got a New Face),” and laying down a mammothly menacing groove in “Cousins.”

It was during such standouts that Tomson proved himself the group’s unsung hero. Visually he looked great, attacking his kit with a thrilled abandon that was part Ringo Starr and part Keith Moon. Musically, the guy was a marvel, his endlessly inventive stick-work verging on mesmerizing.

His bandmates were equally tight, with major props going to Baio, who spent most of the night busting crazy-legged, Muppets-like dance moves. Batmanglij looked like he could have used a can or two of Red Bull, but his complete lack of presence was compensated for by Koenig, whose enthusiasm was infectious right from the moment he trotted on-stage while waving to the crowd.

Vampire Weekend wasn’t shy about mixing things up. In one of the show’s highlight-reel moments, Baio rolled out a stand-up bass and Tomson left his kit to position himself mid-stage in front of a single snare. That mid-set diversion was for “Byrn,” a drone-soaked dalliance that dragged indie-rock through the backstreets of Istanbul.

Mostly, though, Vampire Weekend gave its clearly enraptured audience exactly what it came for. The band has made its name-not to mention the cover of SPIN-by blending sun-splashed pop with breezy Afrobeat. There was no shortage of that mix on this night, from the percussion-bombed “I Stand Corrected” to the genre-hopping epic “Diplomat’s Son.”

Koenig and Batmanglij might call New York home, but, from the exotically incandescent, highlife sounds they wrung out of their guitars, you’d swear they’d just stepped off the plane from rural Ghana.

And, most impressively, they didn’t seem to blow a note all night long. If this was Vampire Weekend when it’s rusty, the group can seriously stop worrying about using up its vacation time.

Mike Usinger
Tags: Vampire Weekend, We Were There