After months of delays, the musical is finally set to bow on Broadway, with tickets going onsale this weekend. 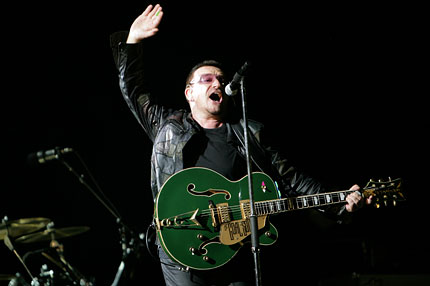 After three years of anticipation and several false starts, Spider-Man: Turn Off the Dark — the Broadway musical featuring music from U2’s Bono and the Edge — will finally open on December 21.

The show, directed and co-written by Broadway veteran Julie Taymor (The Lion King), will take over NYC’s newly-named Foxwoods Theater (formerly the Hilton Theater), with previews beginning November 14. Tickets go on sale August 14, exclusively for American Express cardholders, and ticketing will open to the general public in September. Click here for ticket info.

Last summer, the production appeared on track for a February 2010 opening, but the premiere was delayed several times, reportedly due to both financial and creative difficulties.

Will you be shelling out to see Spider-Man: Turn Off the Dark? Sound off in the comment section below!