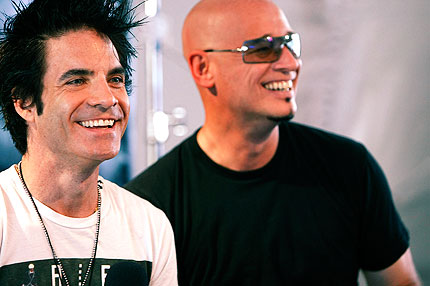 Despite their excitement to play at the Denver, Colorado festival, the band was anxious for the gig as they’d flown in day-of-show from the East Coast. “Today we are playing on rented gear, because last night we were in Tampa, FL, and that’s a little scary and stressful, just to jump up on stage, no sound check, and you just have to trust your crew,” lead singer Pat Monahan said.

The band also talked about their three-year hiatus from recording and touring, which ended with 2009’s Save Me, San Francisco, and its massive hit single, “Hey Soul Sister.”

“We took a few years off because we have the world’s greatest job, but we were behaving as though we didn’t, and we needed to change that,” Monahan said candidly. “Finally being able to appreciate that again let us make the best record of our career, and people are just sensing it and feeling the love we put into it, and its going better than ever.”

See all of our exclusive interview with Train below, and click here to check out more interviews from the American Express® ZYNC ZONE!Scalable, non-watermarked