The Strokes Return at Lollapalooza, Handsome As Ever

Their airtight first U.S. show in four years goes off without a hitch, and without fireworks. 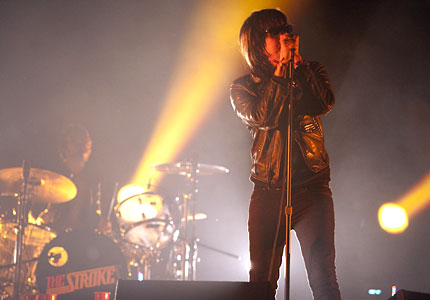 Well, you can’t call it a reunion — it’s only been four years since they were an active concern. And the band members have hardly been in seclusion — their lead singer wrapped up his solo tour a few weeks ago. Yet still, the Strokes awakening from dormancy to headline the opening night of Lollapalooza felt like an event, and, counterprogrammed as it was against the dreaded pop spectacle that was Lady Gaga, even felt a little bit like a statement.

(Certainly the frat pigs chanting “Fuck Lady Gaga!” throughout the set thought they were making a statement.)

Entering to the iconic drumbeat from “We Will Rock You,” then launching into the too-hot-for-Is This It? anthem “New York City Cops,” the Strokes did not look or sound markedly different than when we last left them. Albert Hammond, Jr.’s ‘fro is tighter, vintage shirt and tie replaced by a vintage two-sizes-too-small Journey Frontiers shirt, Julian Casablancas has a blonde tuft in the back of his hair. That’s about it. But everything else, save for the slick set design, seemed straight outta turn-of-the-millennium NYC, as tied to a specific moment and place as Soundgarden will be on Sunday night.

And that’s a good thing. Though some may have dismissed Is This It? at the time as derivative, or dismissed the band as poseur clotheshorses, a decade later, they don’t quite sound like anything that’s come before or since. And while the Strokes may have been quiet of late, the band’s individual members have been anything but, lending the older songs a new tightness and punchiness that may not have been present at, say, NYC’s sweaty Brownies in 2001.

The no-filler 16-song set was, understandably, weighted towards the first two records, although the four selections from the unfairly dismissed First Impressions of Earth more than held their own against the now-classic likes of “Hard to Explain,” “Someday,” “The Modern Age,” and “Last Nite.”

And while Casablancas has done his part to occasionally throw cold water onto the expectations for the long-gestating fourth Strokes album — like their European gigs earlier this summer, no new songs were road-tested — anyone looking to the band members’ onstage demeanor for insight into the current state of relations would have only found smiles and camaraderie and gratitude.

Ambling back to the stage for the five-song encore, bassist Nikolai Fraiture, Prince Valiant haircut still intact, jovially doused manager Ryan Gentles with beer. Throughout the set, Casablancas seemed genuinely jazzed — amazed, even — to be in this spot, as the fireworks shooting from the opposite end of Grant Park served to remind that the Strokes were, and are, a pretty simple and effective and successful rock band, an increasingly rare commodity.

And as they reminded everyone else with their closing tune: Take it or leave it.