And that moment is 1992. The grunge masters go toe-to-toe with Arcade Fire at fest's finale. 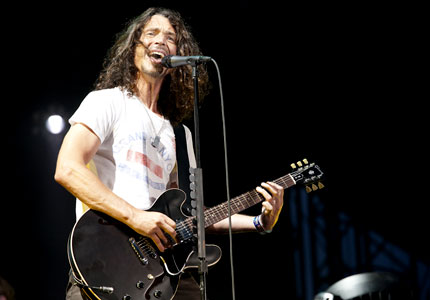 “Triumphant” isn’t a word you’d use to describe Soundgarden’s first proper return to action after 13 years. Not that the Lollapalooza crowd wasn’t responsive or that the band weren’t spirited, it’s just that triumph isn’t really an emotion they’re interested in summoning. To wit: Around the same time Arcade Fire were launching into their hymnal “Wake Up,” Soundgarden were countering with the Superunknown dirge “Like Suicide.” Summer means different things to different people.

At their warmup show at the Vic Theater Thursday night, Chris Cornell looked very much like someone learning how to be the lead singer of Soundgarden again after a few years in the wilderness. Tonight, though, despite a few shaky vocal moments, he seemed energized by the bigger crowd and the bigger stage, even jumping into the audience during “Outshined.” (Even Win Butler didn’t do that.) He even introduced the song by saying, “This is our millionth time playing Lollapalooza,” which is probably about as close as you’re gonna get to a joke at a Soundgarden show.

Soundgarden have always been good at big — even their ballads are apocalyptic epics perfectly unsuited to lighter-waving. “Black Hole Sun,” “Blow Up the Outside World” and “Fell On Black Days” worked as bummer singalongs, and all the proper hits, save for “Pretty Noose,” were present and accounted for. Less heralded minor-key blasts from the catalogue like opener “Searching With My Good Eye Closed,” “Let Me Drown,” and “Get on the Snake” fared just as well. If there’s a quibble, it’s that a handful of equally worthy, relatively uptempo songs — “Drawing Flies,” “My Wave,” “Ty Cobb,” “Somewhere” — didn’t make the cut.

The set didn’t feature much in the way of bells and whistles — Green Day and X Japan must have raided their supply — but they are their own special effect. Cornell’s eerily ageless face, once again draped by his iconic curly mane, looks no different than it did on Louder Than Love 20 years ago. In fact, the entire band (guitarist and Chicago native Kim Thayil, bassist Ben Shepherd, and drummer Matt Cameron) looked, and sounded, more or less as we left them.

But the overriding question, as Soundgarden continue — or don’t — their reunion, is whether any of this is resonating with the kids. It may not be the broadest sample size, but judging from the troika of 20-something girls in front of me attempting to start the pre-encore chant, “Play something else, Chris Cornell! Take off your clothes, Chris Cornell,” these guys just may have a chance to make it all over again.