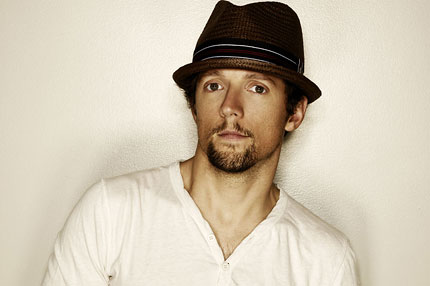 In 2002, a then-unknown Jason Mraz stood in the parking lot of Washington’s Gorge Amphitheatre with just an acoustic guitar and a few original tunes, entertaining people who were hurrying into the venue for Dave Matthews’ annual three-night run. Eight years later, he’s the epitome of breakout success: His last album, 2008’s We Sing. We Dance. We Steal Things, hit the Top 10, and its first single, the soulful acoustic ditty “I’m Yours,” scored a Grammy nod and holds the recordfor most weeks spent on the singles chart. Ever. Not bad for a dude who began with music classes at Lee-Davis High School in the small town of Mechanicsville, VA.

Mraz, 33, is currently in a London studio working with collaborators Martin Terefe and Sacha Skarbek on his follow-up to We Sing…, and rehearing for a U.S. tour this fall, including a pair of dates opening for none other than Dave Matthews at Chicago’s Wrigley Field September 17 & 18.

Mraz-a lively, wise-cracking fellow-tells SPIN.com about the new album, tour, and life in London-and answers questions submitted by his fans via Twitter.

Hey, Jason! How’s London treating ya?
Great. I just walked out of a Kris Kristofferson show, which doesn’t sound like a very London thing to do. He played songs recorded by Johnny Cash, Waylon Jennings, Willie Nelson. A couple nights ago I went to the [adopts English accent] cinema and saw Inception on the IMAX, the biggest screen in Britain. It was good. At first I picked the movie apart, but then I let the story unfold and I started to think, “Oh! I know how this ends.” But I was totally wrong. So… I was pleasantly surprised. It’s kind of like Matrix meets James Bond.

So, the new album: What are you going to call it?
Hmmm… Peace Canoe. It’s kind of like the Peace Train but, you know, a canoe, which is a much smoother ride than a train. It makes you more conscious of your environment. At this point the album could have so many different outcomes. We don’t know if it’s going be a reggae record, or a more heartfelt acoustic album, or a jam band thing. All these different varieties are in there.

What’s your songwriting process?
I come through London a couple of times a year and unload a backpack of songs with Martin [Terefe] and [Sacha Skarbek], the two cats that produced my last record. Paul McCartney and John Lennon would often write a song a day, so I have the same workmanlike philosophy. Around 11 A.M. we show up and immediately somebody has an idea, whether it’s a news story they read or a movie they saw-somebody comes in with a couple chord ideas. Then-boom!-we have something started by lunch and hopefully by dinner time we’ve got a decent song that can live on its own regardless of production. If you look at the Beatles catalog, you can perform any of those songs any number of ways and they’re going to be great songs, so it’s not necessarily the production.

You’re hitting the road on tour this fall. Can fans expect new songs live?
I hope so. I would prefer to be doing a lot of the new material, just to see how it feels because I’ll be going back in the studio in October or November to finish the record. I want to see how they feel, how they translate, how they evolve. Songs always get better after you start playing them live.

Tell me about some of the songs specifically.
Well, love is a common theme. One of the working titles for the album is The Love Album.”In Your Hands” or “I’ll Leave It In Your Hands” is a song that I wrote this weekend. I would call it a fictional tale, but it’s based on real events, and it’s about how there are plenty of things you can do that are great by yourself, but doing them with someone else is better. The lyrics are [sings], “Like motorcycles and for sure the Eiffel tower, they were made for two / A double bed has never felt so empty. What’s missing in my life is you / I’ll leave it in your hands now.”It’s a song of longing. Another example: I wrote a song for a child in Ghana, and it’s about a big hand connecting with a little hand, an adult connecting with a child. There’s rap reggae and fun, quirky, sunshine, lift your spirits, everybody clap your hands kind of songs.

Let’s move onto the questions from your fans… What song is constantly stuck in your head?
You know what’s really fucked up? I don’t have a song in my head. I count. I walk down the street and I’m going, “47, 48, 49, 50.”I stop myself and think, “What are you counting for?” Sometimes I wonder if I’m preparing myself to go blind. I recently read that it’s the left-brain that does all that calculating, and the right brain that does the poetry. Somehow I’ve veered way towards the left. I’ve been doing it for years. Maybe I do art to balance it out.

NEXT: What topics do you find easiest to write about?

What topics do you find easiest to write about?
Certainly love. There’s a certain feeling of giving, a certain feeling of generosity in love songs. When you sing a song of love, you’re actually giving something to yourself, too. You’re singing and casting these affirmations of love out into the universe. It resonates in your body in a way that feels extraordinary. And if you’re singing to someone, or if they’re singing along, and suddenly you’re in harmony, then it’s actually making a huge difference on a subatomic level that is actually transforming the world.

What made you become a vegan?
I’m actually no longer a strict vegan. I don’t hang out in the cheese section-I don’t even eat cheese. I don’t drink milk. But every once in a while I’ll have an egg. I’m going to eat eggs that come out of my next-door neighbors farm, that’s just the way it is. I just choose not to eat factory food, the processed food, just whole foods, real food. It all started with watching one too many documentaries, or reading one too many books. After a while you just lose your appetite.

Who is your biggest musical inspiration?
I should have thought of an answer for this eight years ago. Today it’s Nas and Damian Marley. I listen to KCRW online, and I just usually leave it on at home. Their song started to get repeated quite a bit, along with Midlake’s song “Roscoe,” which is pretty bad ass. So my biggest inspirations right now are Midlake and Nas with Damian Marley. I could listen to those guys for like 30 years.

What’s the last song you listened to?
A buddy of mine made me a mix CD. I recently had breakfast with the head of Atlantic Records, Craig Kallman. He’s an amazing individual, who has perhaps the world’s largest vinyl collection. I said, “What are the ten records I need to hear before I die.” So he put together a mix for me and unfortunately there’s no track names or anything. It’s a lot of rare groove and soul with some beautiful arrangements, compositions, and voices I’ve never heard before. The last thing I heard was obscure and brilliant, and was probably performed by Jesus and his pals. I don’t know who sang them. But I could use Shazam [a iPhone app for recognizing music]. That’s it! I’ll Shazam them!

What’s the last photo you took on your iPhone.
The last photo I took on my iPhone was actually of Martin [Terefe]. He had his toenails painted. His daughter Hannah set up “Hannah’s Pedicure Shop” in their home and gave the whole family pedicures. So the picture is of him sitting on the couch with his toes painted pink and he’s rapping words from dictionary. It’s a hot photo actually. And the picture prior to that is my cat falling asleep in my hands. Yeah, I’m a cat man.