One of the minds behind SPIN's 2009 Album of the Year talks about his first solo album -- and what's next for his other band. 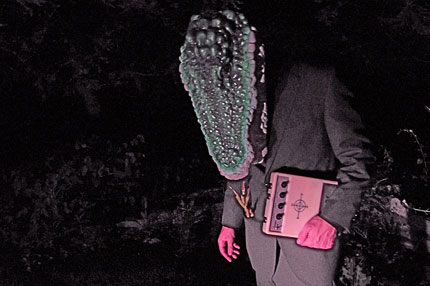 Avey Tare, aka Dave Portner, could be resting on laurels in 2010: After all, his band Animal Collective hit a creative and popular zenith with 2009’s Merriweather Post Pavilion, a record that bridged a frenzied urge for experimentation with viscous, danceable jams — and was SPIN’s Album of the Year.

Instead, Tare headed to a swampy section of upstate NY with original Animal Collective cohort Josh “Deakin” Dibb and crafted Down There, his solo debut (out October 26). Like his work as part of AC, the record is a challenging, but rewarding, listen: Take “3 Umbrellas,” for example, which sounds like a chaotic riff off Hans Zimmer’s unforgettable, carnival-esque theme music to True Romance.

But, as we saw with Merriweather’s “My Girls” and “Summertime Clothes,” Tare can get funky, too, and he swaggers through an Aphex-Twin-meets-James-Brown-style stream of consciousness on “Laughing Hieroglyphic,” and harnesses a cybernetic version of R&B on “Heather in the Hospital.”

SPIN.com reached Tare to talk about Down There, how he compares his solo work to bandmate Noah “Panda Bear” Lennox (who also has a solo album out soon), and when Animal Collective will get back into action (the answer: “Soon.”). Read on:

What about the songs on Down There make them specifically yours, and not something that would fit into Animal Collective?

Was there an intent to go in a different direction from Merriweather Post Pavillion on the solo album?

Well I wouldn’t want to re create Merriweather. The feeling that I put into a song usually gets carried away with that song once it’s recorded.It’s like purging myself of that feeling.So the feelings that went into Merriweather weren’t in me when I was making Down There.I was in a very different place with DT than where I was with Merriweather. Physically and mentally.Plus the fact that Geologist and Panda Bear weren’t involved makes it different too.

How does your approach to solo work differ from, say, Noah’s as Panda Bear?

I don’t know he lives so far away.I miss him sometimes.

Do you think it’s challenging for listeners? If so, is that an intentional tactic?

For me it’s hard to think about making something that’s intentionally going to be a challenge.I feel like what I do comes naturally in the sense of song structures and in the sense of the feeling that goes into a song and what sustains my interest about a song.I try to be honest and put as much of myself into the music as I can.I feel like I challenge myself in trying to accomplish a goal or even to make something that sounds unique more than I think about trying to challenge listeners.

I do like music that is challenging in the sense that I might not be able to figure it out right off the bat. Or, even more so, in the sense that it makes me think to myself, “Wow, how did this person or people make this or come up with this?” But ultimately I have to be touched somehow by the music or feel like the music is gonna touch.

I rarely, if ever, like a song just cause of the ideas behind it and I would never create music based on that alone.I do think some of the best records are records that warrant repeated listens and take time to sink in but I have no way of judging if I made that type of record cause it just feels like a part of me.I think I made a record that’s enjoyable to listen to but maybe not at all times of the day.

Defining music as challenging is a subjective process to me.One person might so easily find a specific record challenging while another person may not.With that in mind, it seems futile to attempt to specifically make something challenging.Because who are you attempting to challenge?I feel like that kind of thought or creative process would build boundaries and then I’d get stuck and probably make a record no one wants to hear.I do what I can to leave all possibilities open.

After working with Deakin on this album, will he be involved in the next AC album?

Has any thought been given to, or work been done on the next AC album?

Some thought, no work.This is the first time in a long time in my life where I have no music in my head whatsoever.I’m kind of basking in that right now.Doing other things for a short while.But the time will come for AC to jam. Soon.

What’s your take on the Brooklyn music scene of 2010? Has it changed, and, if so how?

I don’t know about a scene really but there are always sweet bands to see.I’ve seen recent amazing shows by Prince Rama and Highlife — or maybe it was Sleepy Doug Shaw. I’m not sure cause he goes by both names.They’re from Brooklyn.

Any new music or bands you’re into, in particular?