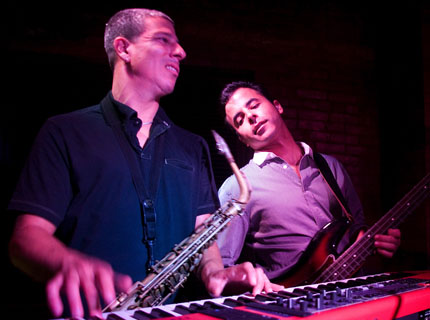 Last Thursday, August 19, O.A.R. bassist Benj Gershman opened his exhibit entitled “Rock, Cause (O.A.R)” with 49 photographs and two original works of art at the Morrison Hotel Gallery in the old CBGB’s space in downtown Manhattan. The exhibit celebrated the band’s upcoming 15th anniversary, and the images were taken by Gershman, documenting the band’s experience on the road from 2005-2010.

O.A.R. band members, Gershman, and Jerry DePizzo were joined by O.A.R.’s touring keyboardist, Mikel Paris, to play a short set for gallery-goers, and offered complimentary drinks to those in attendance.

The exhibition runs through September 12, and photos are available for purchase on site. Prints range in price from $150 to $600 depending on size and will go to support O.A.R.’s Heard the World Fund, which aims to support youth, education and sustainable programs around the world.

View more of Gershman’s photos on his site, benjgershman.com, and on his Facebook fan page.

O.A.R. (the Band) Is Pretty Stoked About OAR (the Russian Olympians)