Frontman of British piano pop band talks about writing music on the road, and his bandmates' new side project. 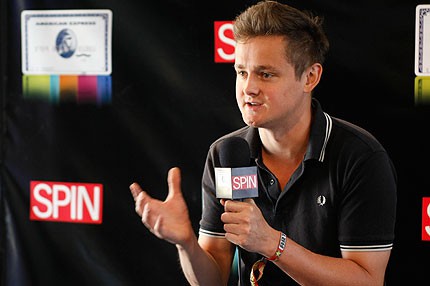 During this weekend’s sun-soaked Mile High Music Festival, bands stopped by the American Express® ZYNC ZONE, to chat with SPIN about their summer festival experiences and much more. Below, check out a video interview with Tom Chaplin of British pop band Keane — including exclusive concert footage from the festival!

Just before taking the stage at Mile High, for the final show of his band’s summer U.S. tour, Chaplin talked about how Keane’s latest release, Night Train, was written on the road, and how he and his bandmates like nothing more than to be on a tour bus — or a train.

He also talked about Mt. Desolation, the new side project of bandmates Tim Rice-Oxley and Jesse Quin — and how he’s their number one fan.

Watch the video below, and click here to check out more interviews from the American Express® ZYNC ZONE!