In personal webcast from a Korean airport, 'Ye answers candid questions from his fans. 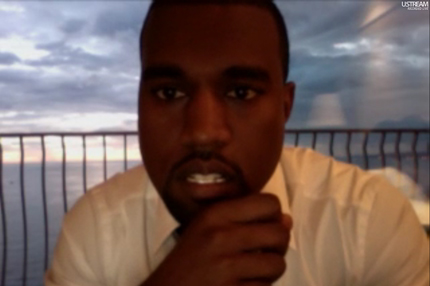 Ever the newly-minted mogul of social media, Kanye West used webcasting service Ustream to answer questions from fans on Friday (while waiting for a flight out of South Korea), dropping details about his new album, his next single, the just-released “Power” video, being a better person, and Twitter.

It took Kanye a few minutes to get used to the webcast’s interface, but once he did, he couldn’t contain his excitement — “Aww man, I get to clarify a bunch of shit now!” West said — then showed his audience his laptop screen, complete with 23 open windows of his music, his collaborators’ music, various photos he uses as research, and, of course, his Twitter.

“Let you know shit is real for everybody thinkin’ I’m not on Twitter,” he joked.

West hasn’t yet chosen his next single (or an album title), but during the webcast he shared a sample of one of the possible options, “All of the Lights,” and it’s vintage Kanye, with regally bombastic horns blasting under smooth harmonic vocals. Whatever the next single turns out to be, ‘Ye says it’ll be out before the end of August.

The rapper also talked about the just-released “moving portrait”/video for “Power,” the album’s first single, saying he originally wanted to craft a longer, 30-40 minute piece with director/collaborator Marco Brambillam, but those plans went awry after the song leaked. “We needed to create a visual for it,” he said.

So Kanye and Brambilla put their heads together, brainstorming by taking cues from Renaissance and Baroque art. “It just feels like things that I dream and I see and I felt since I was a child from reading comic books to being in love with paintings to going to art school, and just always wanting to apply that,” he said in the webcast.

Judging from the webcast, the superstar-turned-meme has turned over a new leaf since last year’s famous MTV Awards debacle with Taylor Swift. “It’s no more time to be a rude asshole celebrity, none of that,” he said. “It’s about the art. I’m not allowing my attitude to get in the way of my creation anymore.”

As for why he decided to follow only one random person on Twitter (which, actually, borrows a page from Conan O’Brien’s book): “My moves are a little bit random sometimes. I’m not really that calculated, it’s just like, hey, it’s what I felt like doing.”

Watch the full version of Kanye’s Ustream broadcast below, and tell us what you think in the comments section.WATCH: Kanye talks to fans on Ustream