Jeffrey Ross Makes His Case to Be ‘Idol’ Judge

If a new online guerilla campaign has its way, this show's about to get a lot more nebbishy. 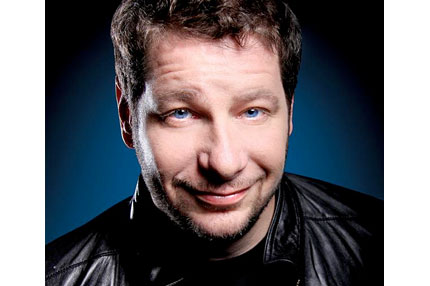 While the American Idol rumor mill continues to circle around J. Lo, Shania, and Steven Tyler, a dark horse has emerged, via a grass-roots Twitter campaign, as a write-in candidate to fill Simon Cowell’s v-neck: potty-mouthed roastmaster Jeffrey Ross.

To prepare him for a potential job interview with show creators Nigel Lythgoe, Simon Fuller, and the suits at Fox, we asked Ross, a self-proclaimed Idol junkie, about his qualifications and references.

How did this #JeffreyRoss4IdolJudge campaign get started?
As soon as Simon announced last year that he was leaving, I started getting a lot of Twitter and Facebook messages saying I’d be a great replacement. Then it got real last week-I started re-tweeting them and it happened organically. Then TMZ picked up on it and John Mayer and Jimmy Kimmel endorsed me. I swallowed the Kool-Aid and started thinking, “You know Simon and Randy and those guys weren’t so well-known when the show started…” I feel like this is something you have to really reach out and get, you can’t wait for someone to call. This isn’t like using Facebook to get Betty White on SNL-that was a one-off, this is a big battle.

But why you? You’re mostly known for the celebrity roasts on Comedy Central, so to most people you’re an insult comedian who doesn’t talk about music much.
I know this sounds like I’m some cynical comedy guy, but for whatever reason, I drop my guard when it comes to Idol. I’m a superfan. This is my show, this is what I sit around talking about with my friends. The challenge would be to brush up on my musical knowledge, but I was the music director of my college radio station and that was the most exciting job I ever had in show business.

How do you see yourself fitting into the show?
Let’s say, for the sake of this conversation, that I’m replacing Simon, not Ellen. I’m pitching myself for the “tough love” seat. I think it’d be refreshing to have someone who’s not a producer or a singer, but who speaks for the people as a fan. Ellen never really played the comedy card, and to move forward this year, the show needs to not take itself so seriously. I love J. Lo, but she’s not gonna tease the contestants. And I doubt Steven Tyler is gonna play the villain. I’m willing to take that hit because I’ll be able to make it come off affectionate. People will know I’m not just being mean-the best insults are backhanded compliments. When I see a good singer, I get teary-eyed. Part of it is jealousy because all comedians are frustrated rock stars. That’s a fact.

J. Lo reportedly may have blown her deal because of her diva demands. What are your diva demands?
I wanna sit in the middle.

Which contestants from the past few years have been your favorites?
I thought Crystal Bowersox was great. I voted like crazy for Adam Lambert. The ones I root for are people like Melinda Doolittle a couple seasons back, who was a backup singer her whole career, not the ones who are working as a bartender in Oklahoma. She’d dedicated her life to show business but didn’t make it. Those are the people who are putting themselves out there. And I relate to that-I know what it’s like to walk into a tough room.

Okay, make your final pitch:
I have jokes, I’m ready to get there on a day’s notice. I’m judging this show anyway from my couch, might as well put me in one of those chairs. I love Coca-Cola. I love Ryan Seacrest. I feel like this could be a new beginning for me and for American Idol. Or maybe the death of us both.