Inside Gathering of the Juggalos

Celebrities injuries! Hillbillies on LSD! It all happened in rural Illinois. Tour the fest with Tom Green! 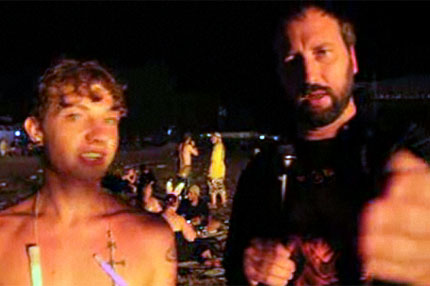 Amongst the chaos: Reality TV star Tila Tequila, who performed (yeah, we’re just as confused as you are…) Saturday night, was pelted with a beer cans and bottles, rock, bricks… and feces from nearby port-a-potties. Then, of course, she did the only logically thing and took off her shirt. Watch video of the fracas at TMZ. Tila was bloodied and bruised by the attack, and is now pressing charges. Insane Clown Posse’s defense? “We warned you.”

But Tequila wasn’t the only target. Method Man — performing Sunday with cohort Redman — was hit in the eye with a full can of beer. He started bleeding and Redman swore at the crowd and attempted to stop the show, but Meth insisted otherwise: “Start the music we’re continuing the show, let’s f**k these motherf**kers up.” Gangster. Watch the video here.

A 49-year-old concertgoer was stabbed, while 25 arrests were made in total (mostly drug related), according to local ABC News affiliate WSIL

Tom Green — remember him? — was one of the fest’s performing acts, and he shot some compelling behind-the-scenes footage from the fest. What did he find? A bunch of shirtless dudes trippin’ balls. Watch below! The Daily Swarm scored some exclusive photos of the event, including some capturing the scene in the campgrounds. They’re hilarious and frightening at the same time. Check ‘em out right here.

Are you making plans to hit 2011’s Gathering of the Juggalos… or screen-printing a “Team Tila” t-shirt? Tell us in the comment section below!