Covers of "Hey Jude" and "Stand by Me" share the spotlight with the band's greatest hits in the three-hour, high energy set. 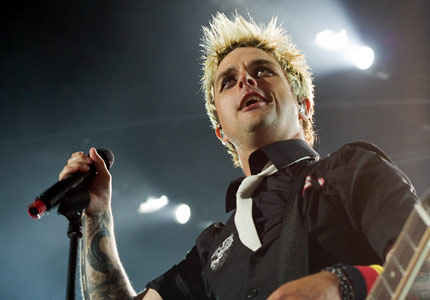 If you hopped inside a flux-capacitor-equipped DeLorean, traveled back in time to Berkeley’s crusty 924 Gilman Street club circa 1989, and told someone in the crowd that the scrappy, sneering punk trio ripping through its three chords in the corner would someday become multi-platinum-selling, Grammy-winning, Broadway musical-inspiring, arena-filling, pyro-launching superstars, they’d probably laugh so hard that the safety pin would fly out of their nose.

Two decades later, though, that’s exactly where Green Day stands, and in front of a near-capacity crowd of 24,000 at Susquehanna Bank Center in Camden, NJ (just across the Delaware River from Philadelphia) — where they kicked off the second North American leg of their 21st Century Breakdown world tour last night — the band delivered a marathon three-hour, career-spanning spectacle filled with more peaks than valleys.

Following a token appearance by the stumbling, beer-guzzling Drunk Bunny — a Green Day concert staple — the amphitheatre darkened as Breakdown’s staticky a capella opener “Song of the Century” poured out of the PA, the audience quickly drowning it out with their singalong.

Instruments in hand, bleached-blonde-and-eyelinered frontman Billie Joe Armstrong and bassist Mike Dirnt hit the stage as if they were shot from a cannon, sprinting around in a show of energy that would rarely let up as the evening progressed, while drummer Tre Cool flashed one of his trademark goofy expressions as he climbed behind the kit.

Augmented by three utility musicians on guitar, organ, and piano, the sextet launched into Breakdown’s title track and spent the next 45 minutes bringing tracks from that album and Green Day’s other rock opera, 2004’s American Idiot, to life in dazzling fashion as the impressive backdrop shifted from towering cityscape to pillars of flame to ominous images of dive bombers and marching armies.

Sonically thickened by the addition of those extra players, “Know Your Enemy” and “St. Jimmy” packed a ferocious wallop while “Boulevard of Broken Dreams” turned extra grand. “Thank you for the last 22 fuckin’ years,” Armstrong uttered during a “Boulevard” pause — maybe he says the exact same thing at the same point in every show, but the emotion and sincerity in his voice was palpable.

As focused and absorbing as the first part of the set was, the next hour and 15 minutes were decidedly less so, as Green Day stripped back the theatrics and instrumentation and reached into its catalog for an onslaught of old hits — “Nice Guys Finish Last,” “Paper Lanterns,” the Replacements-aping “2000 Light Years Away,” “Hitchin’ a Ride,” and more — that lasted far longer than it should have.

Sure, it was like going back in time to a ’90s Green Day show, but you can never really go back, and while the band maintained its energy and never looked like they were simply going through the motions, they clearly didn’t feel as emotionally invested in those tunes.

Thus, Armstrong and company got especially screwy, spraying the crowd with power washers; turning into a classic rock jukebox by engaging in short bursts of Sabbath’s “Iron Man,” Guns ‘n Roses “Sweet Child o’Mine,” and AC/DC’s “Highway to Hell” before tumbling into “Brain Stew”; and inviting even more audience participation than usual.

Three young fans crawled up onto the stage to sing “Longview,” each worse than the previous; it was like watching the American Idol audition rounds. At least the last poor girl, saddled with the “Call me pathetic” line which encouraged the crowd to do just that, got a parting gift: Armstrong’s guitar. “Now go sell it and get some singing lessons!” he roared.

And then Green Day morphed into something strangely resembling a wedding band, indulging in a drawn-out, soul-revue-style medley of “Shout,” “Stand by Me,” “Satisfaction,” and “Hey Jude” that at least was well-received by the parents (and grandparents) in the crowd. “You guys spent your hard-earned money tonight, so we’re gonna give you the best show you’ve ever seen!” Armstrong bellowed.

Finally, the band washed away the silliness by returning to the more recent past for rousing versions of “21 Guns” and “Minority.” The first encore featured crowd-pleasers “American Idiot” and “Jesus of Suburbia,” while the second encore included a moving version of “Wake Me Up When September Ends.” Of course, Armstrong ended the night on stage by himself, with an acoustic guitar, singing, “I hope you had the time of your life.” For about two-thirds of the show, it was.

Michael Goldberg
Tags: green day, We Were There