Whoever said "less is more" never had to play punk songs in front of 50,000 people. 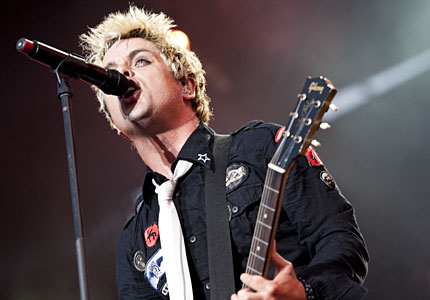 You know how everyone’s got that one friend/uncle/teacher who just tries a little too hard to make you think he’s awesome? Someone who means well but just won’t stop with the jokes and the magic tricks? Well, give that guy some explosives and an audience of 50,000, and you might wind up with something like Green Day’s headlining set at Lollapalooza Saturday night.

From the opening “21st Century Breakdown” forward, nearly every song of Green Day’s two-and-a-half hour set was stretched well past its prescribed length as the ever-earnest Billie Joe Armstrong would break to bring fans onstage to sing or mug, then shoot off water hoses or t-shirt cannons or orchestrate singalongs or throw in classic-rock cover medleys. And pyro.

These things are all time-tested arena-rock staples on their own, but in aggregate and relentless succession, they become the festival-set equivalent of a Carrot Top show or the KFC Double Down or a time-out during a Nets-Warriors game.

It should be said that the crowd, who paid a lot of money to be entertained, did not agree — and certainly Billie Joe in overcaffeinated ringmaster mode would be far more appropriate to the setting to the prophet of doom who presides over most of 21st Century Breakdown. (In fact, Armstrong seemed to pretty much abandon his sober, leader-of-a-troubled-generation soapbox, telling the crowd, “All you need is booze and a little drugs and everything will just be fine.” So, guessing the next record won’t be another political concept album.) And there’s nothing like feeling cranky while 50,000 people have fun to make you feel even crankier.

Perhaps the biggest frustration with supersized Green Day is that the charm of so many of their best songs is the simplicity and immediacy. “Hitchin’ a Ride” isn’t twice as good at seven minutes as it is at three and a half. As the band has become more ambitious in its songwriting, maybe leaving a small, good thing alone is embarrassing to them.

But leading into their own “Brain Stew” with a medley of “Iron Man,” “Ain’t Talkin’ Bout Love,” “Sweet Child O’ Mine,” and “Highway to Hell,” with a snippet of “Stairway to Heaven” tossed around later, is such a guaranteed crowd-pleaser that it almost feels like cheating or pandering. By the time they’d donned feather boas and bras and assorted other costumes to play a long Tre Cool-led cover of the Isley Brothers’ “Shout” with bits of “Satisfaction” and “Hey Jude,” it was hard to feel like you weren’t at Illinois’ largest, longest wedding reception.

Second Encore:
She’s a Rebel
Wake Me Up When September Ends
Good Riddance (Time of Your Life)