The Pretty Reckless singer and Gossip Girl star chats with SPIN at her recent photo shoot. 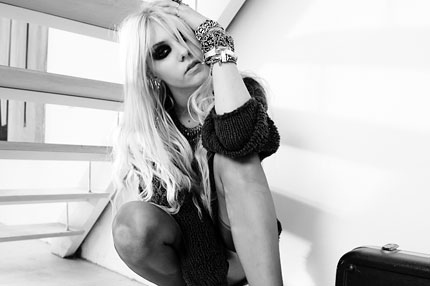 With her provocative look and raw rock sound, Taylor Momsen is heating up the pages of this month’s SPIN — and our video cameras were there as Dan Martensen photographed the Gossip Girl star and Pretty Reckless frontwoman for our exclusive spread. Watch the video below!

While on set, we caught Taylor posing for the camera, and asked her to sit down for a short interview, in which she talked about rock’n’roll, and her eye-catching style choices.

“I dress in a certain fashion that I feel good in, and confident in, and purveys an image that everyone can interpret differently,” she said. “But when I put it on, I feel good in it, and that’s what matters… My goal isn’t to shock.

“I hope that people can relate to the record,” she added. “There is an image that goes along with that, but I hope that’s not all they see.”

Momsen also talked about her first rock concert — a White Stripes gig: “I’d been listening to rock records, but I’d only seen a Britney Spears concert before that. So it was the first rock show I’d seen, and it was the first point where I was like, ‘I wanna do that.'”

Check out the video below and tell us what you think of Momsen’s sound — and her look — in the comments below.