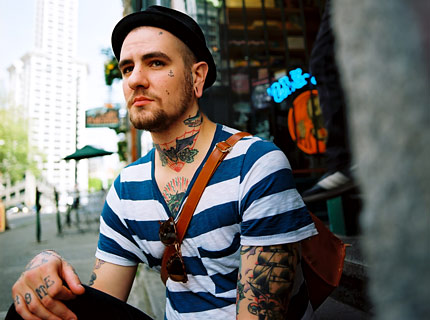 Sara Quin knows a thing or two about witty yet winsome, deliriously self-deprecating, and achingly pretty songs. So when a friend passed along an EP from Fences (aka Seattle singer-songwriter Christopher Mansfield) to the Tegan and Sara star, she fell for it instantly, and, after a year of correspondence, ended up producing his self-titled debut album (out Sept. 28). Hear a song from it, “Girls With Accents,” below.

“Everything that Chris writes, melodically and lyrically, has that rare balance of patience and urgency that I love in honest, haunting pop songs,” Quin tells SPIN.com. And “honest” and “haunting” absolutely describe the vibe of “Girls With Accents,” a lament about squandered romance from Mansfield (one of our artists to watch at last year’s Sasquatch fest), with its over-the-top but true-as-hell chorus: “I’m fucking up, I’m fucking up, I’m fucking up everything.”

“Guess I got just what I wanted,” begins each verse, in which yet another missed opportunity is described, like the inability to talk to someone in the hallway, or getting drunk and passing out after finally getting a potential lover alone.

“I love ‘Girls with Accents’ because it reminds me of high school, but also resonates with the adult me,” says Quin. “It has these tough slacker lyrics but also a super hooky melodic line that is really upbeat. I asked Chris to holler the background vocal parts, which I don’t think he generally does, and that was fun.”

Mansfield felt a definite songwriting kinship with Quin, even though many of the songs on Fences were conceived before he met Sara and her band’s guitarist, Ted Gowans, for some overly-caffeinated recording sessions over eight days in Victoria, British Columbia. “She waves her hands around and sings ideas right off the cuff,” he says of Quin. “Any idea she had without fail would be the right direction for a song. It was completely fulfilling in every possible way… I didn’t once feel like someone was changing my art to fit into something else.”

Adds Quin: “Chris is a one-take wonder when it comes to capturing terrific performances. I wanted to record the songs simply, wanted them to feel intimate but also atmospheric. The extremely quick session and extremely modest budget worked very well! We didn’t over think anything.”

Check out the song and tell us what you think in the comments section!

Fences has a few live dates in August in the Pacific Northwest, an appearance at Seattle’s Bumbershoot festival September 5, then a short West Coast Tour in late September — click here for all dates.

August Wilson’s 1990 Spin Essay on Fences: “I Don’t Want to Hire Nobody Just ‘Cause They’re Black”