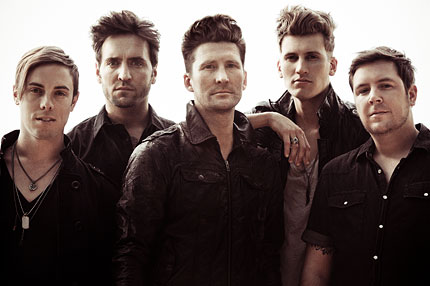 Hard-rocking Florida-born five-piece Anberlin — who broke through in a big way with their fourth album, New Surrender, and its uber-popular single, “Feel Good Drag,” a rock radio staple in 2009 — is about to release the follow-up, Dark Is the Way, Light Is a Place (out Sept. 7). Below, download “Pray Tell,” an exclusive cut from the upcoming record.

This time around, Anberlin worked with uber-producer Brendan O’Brien, known for producing albums by Bruce Springsteen, Pearl Jam, Rage Against the Machine, and more. Frontman Stephen Christian was completely beside himself when he found out he’d be working with this studio whiz.

“It’s like winning the lottery, or landing a dream job,” Christian tells SPIN.com about O’Brien, who approached the band on his own after discovering Anberlin through his daughter, who’s a fan. “I’m not going to get a law degree or be a doctor or something, but if there was a pinnacle, if I had graduated law school, if I had got my doctorate, this would be it.”

Christian says that heading to the studio with O’Brien was the biggest “man-up” moment in his band’s career: “Say it’s like soccer, and you always played at a middle school level, but suddenly, you’re at the World Cup stage and this is it, you know? This is that one chance… That’s what recording Dark felt like.”

“Pray Tell,” which was influenced by the band’s 2009 South American tour, where theydiscovered Brazilian music and its African-influenced percussion, turned out to be one of the most magical moments in the studio. “It started with the beat and then the music rolled, the lyrics rolled,” Christian says. “Then, we got down on the ground in the studio and just started clanging on anything we could find, from 2x4s to the side of a broken tom drum.”

Lyrically, the song is a cry from Christian to see the “real” faces of people, something that’s become harder to do as his band’s star has risen. “We all have this game face, this show that we put on, but I feel there’s more to people than that, and I wanted more out of people than just what they’re showing,” he explains.

And when “Feel Good Drag” became a bona fide hit last year, Christian was discouraged at times when people suddenly came out of the woodwork and wanted to be involved with Anberlin. “Success brings flies,” he says. “It brings a lot of people who don’t really care. They just care about you today. They don’t care about who you are tomorrow, and they didn’t care about you yesterday.”

Instead, Christian retreated into his music, much of which made it onto Dark Is the Way…, and to his domestic life — he got married just before his band’s first bout with breakout success. “I was going insane from the pressure, from the label calling to say, ‘Hey, if this fails, it’s on your head,'” he admits. “And from the band. And from the fans. And from yourself. So she really helped to bring clarity.”

Tell us what you think of “Pray Tell” in the comments section below!