Surfer-turned-rocker talks about his kinship with Colorado and the rockin' names of his kids. 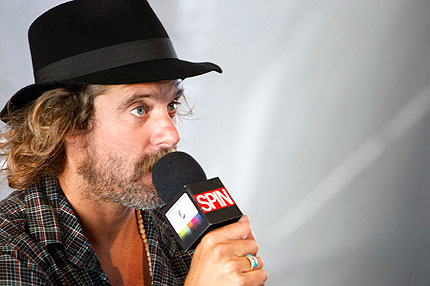 During this weekend’s sun-soaked Mile High Music Festival, bands stopped by the American Express ® ZYNC ZONE, to chat with SPIN about their summer festival experiences and much more, among them Donavon Frankenreiter — watch our video interview, plus performance footage below!

Frankenreiter, who, like pal/ex-labelmate Jack Johnson, became a rock star after being a pro surfer, talked about his early-afternoon slot at the festival, and how he loves playing in Colorado.

“[Colorado] definitely has a unique, outdoorsy sort of feel to it,” he said. “Kind of reminds me of a beach vibe style, but with no beach.”

The mustachioed Frankenreiter also talked about naming his kids after Ozzy Osbourne and Jimi Hendrix, and his upcoming album, Glow, out in October, which he called “totally different” than anything he’s released before.

See all of our exclusive interview with Frankenreiter below, and click here to check out more interviews from the American Express® ZYNC ZONE!