The comedian tells his own story of Frankenstein on an upcoming 7-inch single, and releases a live rock album. 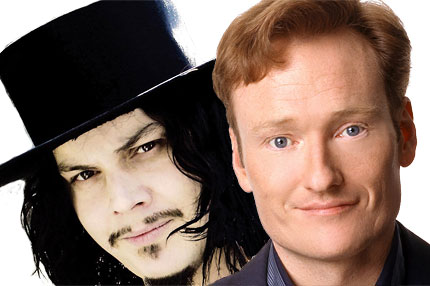 The first release, Live at Third Man, was taped in front of a small audience of 300 fans on June 10, during O’Brien’s “Legally Prohibited From Being Funny on Television Tour,” and features a duet with White on a cover of Eddie Cochran’s “20 Flight Rock.” (Check out SPIN’s review of the tour here.)

The second, And They Call Me Mad?, is a 7-inch single with O’Brien’s improvised, spoken word retelling of the Frankenstein legend (which sounds nothing other than totally awesome) on Side A, and an interview with Conan conducted by Jack White on Side B.

Both can be ordered now via Third Man Records website, and the And They Call Me Mad? single will be available via iTunes early next week.

For record collectors (and good Samaritans), 150 copies of a limited-edition, tri-color 45 of the single will be sold for $100 a piece at Third Man’s Nashville shop on August 24, with proceeds benefitting ReTune Nashville, an organization raising money to replace instruments damaged in the city’s massive flood earlier this year.

What do you think about Conan’s music and spoken word? Tell us in the comment section below!