Amanda Palmer Takes SPIN Behind the Scenes of ‘Cabaret’ 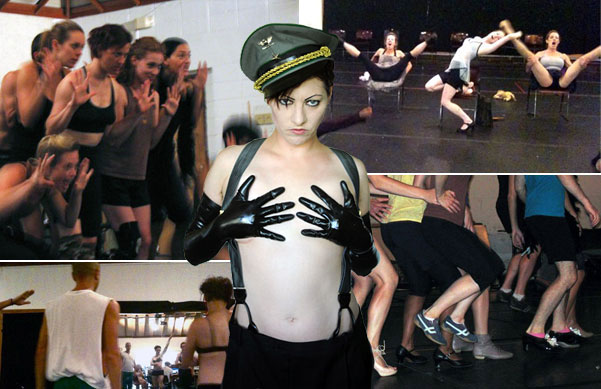 Whether she's fronting the Dresden Dolls, portraying conjoined twins, covering Radiohead on the ukulele, or singing songs with fiance Neil Gaiman, Amanda Palmer imbues her work with a theatrical flair.

That's especially true of her latest project: Palmer stars as the Emcee in the American Repertory Theater's production of Cabaret, the Kander and Ebb musical set in the final days of Germany's Golden Era in 1931, which opens August 31 in Boston.

We asked Palmer to share some of her personal photos from the show's rehearsals, then caught up with her during a break to talk about bringing the 1966 musical (which was later made into a film starring Liza Minnelli and Joel Grey) to life, her way.

Whether she's fronting the Dresden Dolls, portraying conjoined twins, covering Radiohead on the ukulele, or singing songs with fiance Neil Gaiman, Amanda Palmer imbues her work with a theatrical flair.

That's especially true of her latest project: Palmer stars as the Emcee in the American Repertory Theater's production of Cabaret, the Kander and Ebb musical set in the final days of Germany's Golden Era in 1931, which opens August 31 in Boston.

We asked Palmer to share some of her personal photos from the show's rehearsals, then caught up with her during a break to talk about bringing the 1966 musical (which was later made into a film starring Liza Minnelli and Joel Grey) to life, her way. 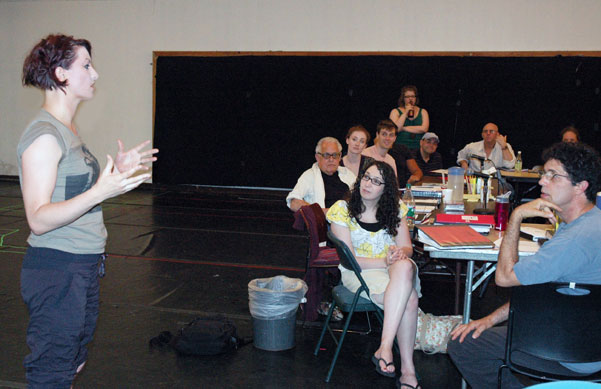 "I kind of hate musicals," Palmer laughs, "but I love good musicals. I just feel there aren't that many of them. Cabaret is one of them."

Palmer grew up loving theater—she admits to starring in a production of Cats as a 7th grader—so putting on Cabaret was an opportunity to dive back into a universe that had always interested her.

"There's something about putting up a production like this that's really exciting, if you're collaborating with people you love," she says. "You get to be in a tight-knit little theater family for a couple of months and just dig in to the process. I love that." 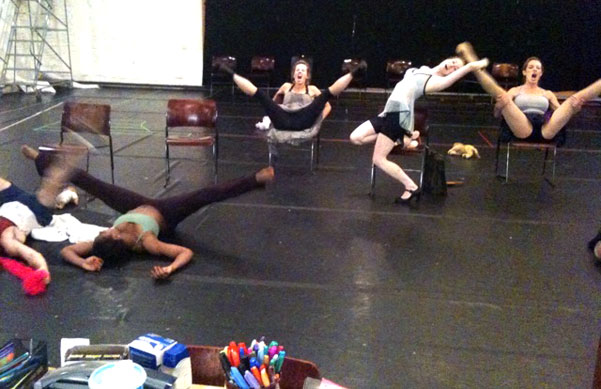 "A lot of this work is really challenging to me," Palmer says. "These 22-year-olds are really, really fit and learn choreography so fast and I'm up there with two left feet saying, 'I'm not used to this.'" 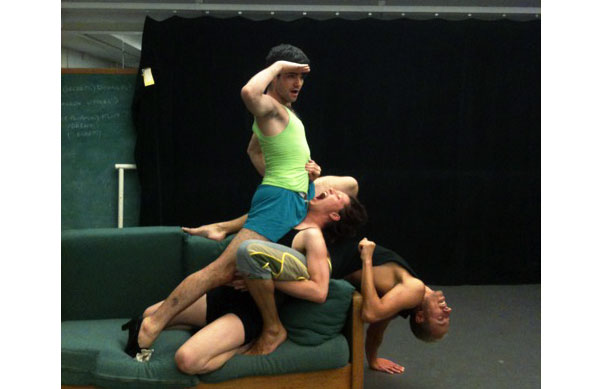 But an even greater challenge comes from trying to run her primary business, i.e. being Amanda Palmer, which has become a full-time job, especially with the success of her recent self-released projects, like her EP of Radiohead covers, which sold $15,000 worth of copies in its first three minutes onsale in July.

"The toughest part of the process, to be totally honest, has been doing eight-hour rehearsals and trying to commit to this process, while running an entire business in the early hours of the morning and the late hours of the evening and not having enough time to eat and sleep," she says.

"I just put a record out and I'm putting out another record this winter—I think I'd be going crazy even if I wasn't doing this show," she adds. "I feel kind of like an insane person juggling three different lives." 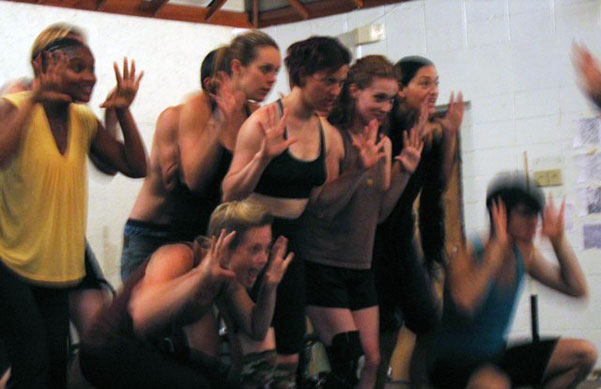 "I wound up picking the Emcee because of the long run [of the show, which includes three dozen performances]," Palmer says. "I think if it'd been a short run, like seven or eight shows, I would've picked Sally and I would've blown my load.

"I'm playing the Emcee as a he/she mystery character where I get down on the floor with the audience and inhabit the space with them, which Sally doesn't really do. But I was starting to second guess myself, wondering if I took the easy way out because I type-cast myself. [Laughs] But you know what? I'd be thinking the exact same thing if I'd be playing Sally Bowles, so there ya go." 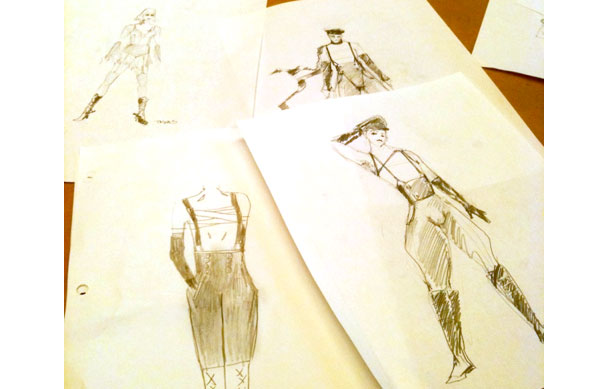 Palmer has been deeply involved in every aspect of the production, including costume design. "You get to go into your complete fantasies and make all these clothes from scratch," she says.

One of her favorite looks was inspired by the 1984 film Johnny Dangerously, a 1930s gangster comedy starring Michael Keaton.

"I was always in love with this dress that the female protagonist wore in the night club scene where she seduces Johnny Dangerously," Palmer explains. "It's this long, flowing metallic and silver gown with red lining." 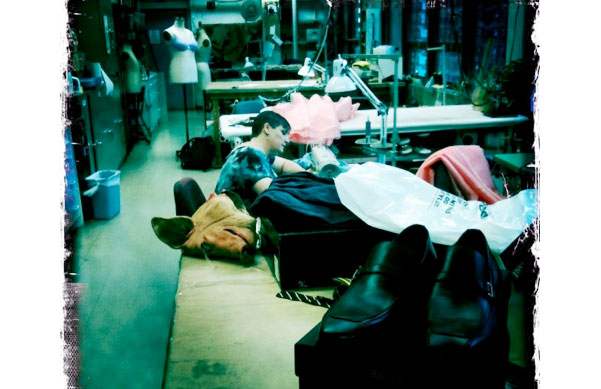 Says Palmer: "I was desperately searching on YouTube to find footage of the dress, and I finally found it and was like, 'Make me that! Make me that! I want that!' And they did! It's like being in Candyland. So awesome." 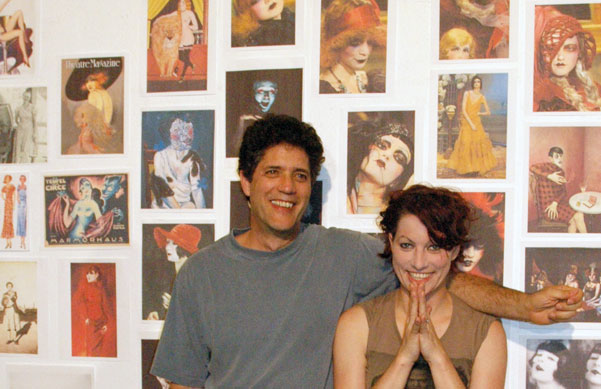 Palmer's primary collaborator on Cabaret is one of her closest mentors: Steven Bogart, her Lexington, MA, high school drama teacher (pictured above).

After college, she helped Bogart stage a production of Cabaret, and was so impressed that she vowed one day to star in it herself. "I told him that his production was too good to only go up for a couple nights in high school," Palmer says. "This needs to find a bigger stage."

But the opportunity didn't present itself until a few years ago when the American Repertory Theater approached Palmer about doing a show. "I told them I'd love to, as long as the director was Steve Bogart. And they hired us. It's 10 years on after the original idea, but we're finally doing it." 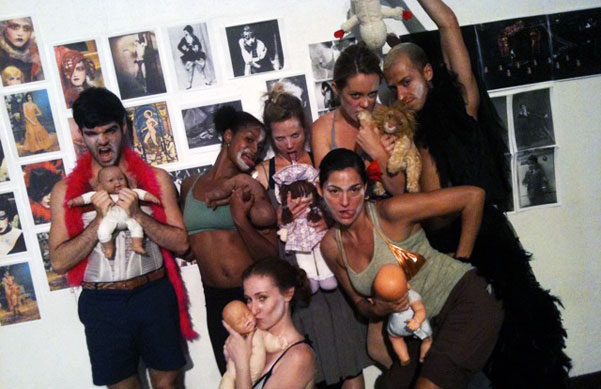 One of the major influences in this production of Cabaret is Japanese Butoh theater, where the participants perform in white body makeup. It's a specialty of director Bogart.

"A lot of the work that we did in the beginning for the development of the choreography and getting to know each other was this really beautiful, heavy duty, emotional Butoh work," Palmer says. "Most of the actors wound up going into some really, really dark places and crying a lot. It was beautiful. Tears of joy. Tears of relief.

"It's this kind of stuff that I really miss about the theater world. You get into a room, close the door, and you do some really, really heavy physical stuff and find things. Go places that you just don't go in your mundane life. Having those experiences has made this worth it." 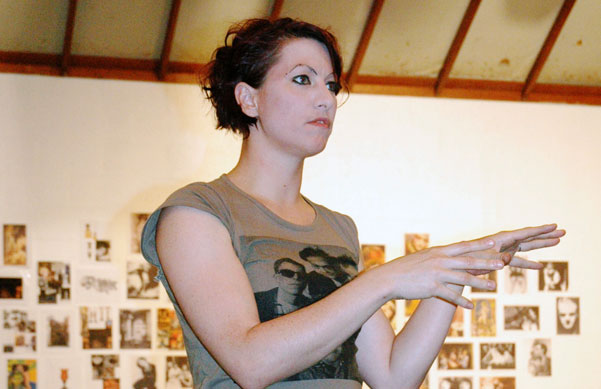 Fans of both Palmer's solo work and Dresden Dolls are amped about her appearance in Cabaret, buying tickets and tweeting about plans to travel to Boston solely for the performance. But she's not concerned at all if people are coming simply to see her, rather than the production itself.

Plus, there's the ART's regular audience to consider: "You get these crazy 15-year-olds and these 84-year-old Cambridge intellectuals, and I love that. I love the fact that we get to collide all these folks and take them on this ride together. It's fun." 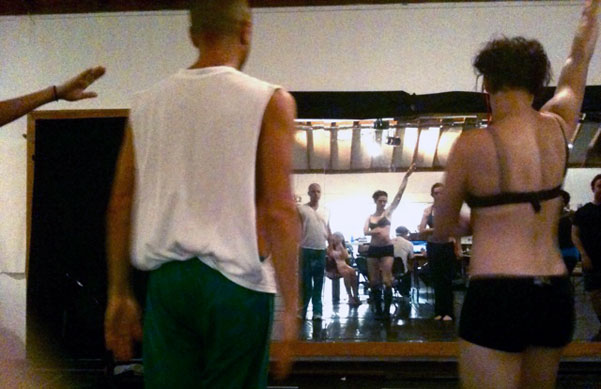 Select nights of the run will extend beyond the actual performance of Cabaret, into something Palmer is calling "Amanda Fucking Palmer's Late Night Fucking Cabaret," an aftershow that will feature guest appearances by her friends, including Australian cabaret artist Meow Meow, British bands Bitter Ruin and Robots in Disguise (of Mighty Boosh fame), and Juan Son, whom Palmer calls "the Mexican Bjork." 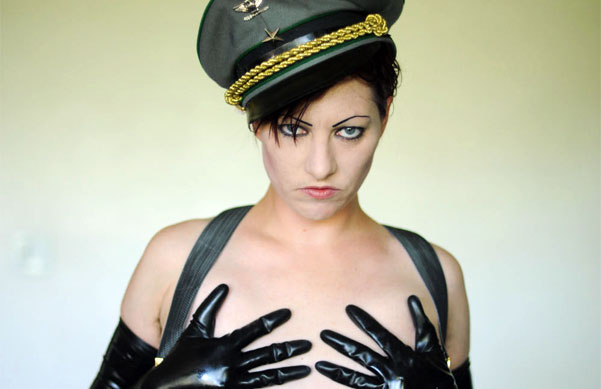 Cabaret opens August 31 at the Oberon in Cambridge, MA—click here for ticket info, and read Amanda's blog for updates on the Late Night Fucking Cabaret.

As for the future of the production:

"I think it's really possible we'll take this show elsewhere. It's selling out like hotcakes in Boston and it looks like the whole run may sell out, which would be wonderful. The challenge is, of course, what I don't do if I do more Cabaret. Does it mean I need to put off putting out a new record? Can I not tour with the Dresden Dolls? What does it end up costing me? For those kind of problems in my life, I'm incredibly grateful."

And yes, she did say "tour with the Dresden Dolls." When asked to confirm that news, which would mark her band's first gigs since 2008, all Palmer would say was, "Mayyyyyybe. There may well be."