The alter ego of ex-VJ Simon Rex offers his best tips for the dating scene. Plus: Download a free MP3! 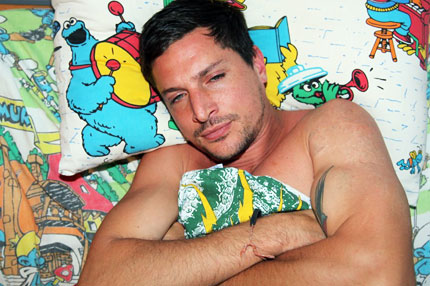 Playing his alter ego, rapper Dirt Nasty, former-MTV-VJ-turned-actor Simon Rex is all tongue-in-cheek Type-A douchebag bravado, from his boastful breakthrough single, “My Dick,” to the cuts on his new album, Nasty As I Wanna Be, which hit stores earlier this month, and features odes to partying, carousing, and macking on cougars-along with guest spots from Ke$ha, Warren G, Too $hort, and Andy Milonakis.

So, as Labor Day approaches, we asked Dirt to share his most reliable pickup lines for those trying to close the deal with their summer crush. Check out his words of wisdom, and download an MP3 of his new song, “Cougars,” featuring singer-songwriter Bonnie McKee, here:

PICKUP LINE NO. 1
“You walk up to a girl on the street with a map open, right? And you say ‘Excuse me, I’m lost. Can you show me how to get to your place?’ And you’d like point at the map in a really nerdy way, and make them laugh. It’s great when there’s the physical delivery, too.”
When To Use It: “I’d say that’s one to use out in the daytime, on the street. That’s daytime, where you’re approachable. You wouldn’t do that in a nightclub with a map, obviously. When you’re traveling, when you’re out on the road that’s a good one…It’s a good icebreaker.

PICKUP LINE NO. 2
“You go up to a girl, and you just say, in a defensive manner, ‘I can’t do it!’ And they’ll throw it off and say, ‘What?’ And you say, ‘Lunch tomorrow, but I’m free Wednesday!’ Gets a laugh, you’re in, silly, funny, likable. ‘He went for it.’ ‘He’s funny.’ You already broke down two of the three proverbial walls. Yeah, I really am like that guy Mystery, aren’t I?”
When To Use It: “That one I’d say you could apply in like restaurants or something, like in a crowded place, and indoors, and anywhere, anytime of day.”

PICKUP LINE NO. 3
“You see a girl walking her dog in the park. You go up to the girl and you say, ‘What a beautiful day to be walking your dog!’ And she says, ‘Yes, it is, isn’t it?’ And you go, ‘No, I was talking to the dog.’ That way, you insult them, which is the psychology of making them feel lesser than you, which breaks them down, and then they’re either going to like you because you’re an asshole-and women like assholes sometimes-you’re funny, and you’re belittling them, so you’re hitting with a negative comment first. It’s interesting. It could totally work, or they just keep walking. You’ve got nothing to lose.”
When To Use It: “Let’s say Central Park or whatever city park you’re in.”

PICKUP LINE NO. 4
“I like to go for the humor. Say, ‘I want to take you to this amazing little French restaurant that I know called Jacques… in the Box.’ It’s all in the delivery. Or you could say you want to go to this little Irish pub you know, a little mom and pop spot called McDonalds.’ Either one of those. The fast food ones always get a laugh.”
When To Use It: “Let’s say you’re on a first date and you want to make them laugh or something.”

PICKUP LINE NO. 5
“I was in the Hamptons, and I saw this girl that was really beautiful. And she was at this party, wearing a white dress, she was really pretty and exotic looking. She looked like she was from Europe, you could just tell by her style and her walk. So I just rolled up to her, like I knew her. And I’m just like ‘Hey!’ And she’s just like ‘Hey! Don’t I…how do I know you? Did I meet you in Ibiza?’ And I’m like, ‘YES!’ I just totally lied. I never met her before in my life! I’ve been to Ibiza once for two days, I certainly didn’t meet her there, I’d remember. She was probably nine at the time.”
When To Use It: “That’s the number one rule of improv. Don’t ever say ‘no,’ just say ‘yes.’ It’s just about being positive-the ‘Yes’ factor. Oh I like that! The ‘Yes Factor’-that’s an interesting philosophy.”