Panic! at the Disco's Ryan Ross shares the story behind his new group's moniker. 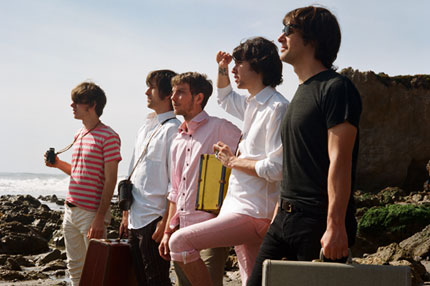 This week: Panic! at the Disco offshoot Young Veins, who recently released their debut, Take A Vacation!

Why Young Veins: “At first, when we were throwing around names in the studio, we wanted to call the band the Veins,” recalls vocalist-guitarist Ryan Ross, “but there was already a band called that. So we just called it the Young Veins. We liked the ‘fresh blood’ connotation. But really the name is a Spinal Tap reference. There’s a part where the band is talking about when they were starting out. They were going to call themselves the Originals but that name was taken, so they call themselves the New Originals instead. So we’re sort of just playing off the idea of adding an adjective in front of a band name that already exists.”

Previously Rejected Names: “We thought about calling ourselves the New Things. We also thought the Band Names would’ve been funny.”

Best Band Names Ever: “The Chills. We wanted to use that one, too, but another band beat us to the punch by, like, thirty years. The Like is another good one, and not just because that’s the band my girlfriend [Elizabeth Berg] plays in.”

Worst Band Name Ever: “I don’t know if it’s the worst, but the Beatles is a pretty bad. It’s funny to think that the biggest band of all time has a name based on a bad pun. Maybe it was cool at the time.”