Emily Haines of the indie dance-rockers share the story behind their name. 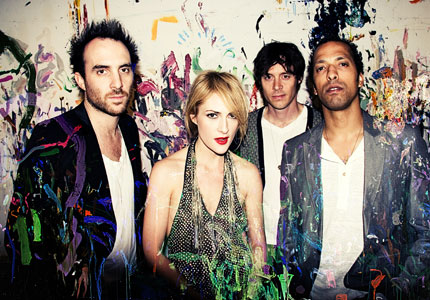 This week: Metric, who’ll be at Lollapalooza on August 7.

Why Metric: “It came from a song that [bandmate] Jimmy [Shaw] and I were working on back in Toronto in the early days, like ’97 or ’98,” says singer Emily Haines. “Jimmy had a song that involved a sound he’d programmed into his keyboard and called ‘Metric.’ When we saw that word on the keyboard’s LED screen it looked so electro. It had a no bullshit vibe. It was a little cold and standoffish and we’re down with that. It works for us. Some people think it has something to do with the fact that we’re from Canada — which uses the metric system. That was coincidental, though at the time we were into arty electronic stuff that was coming out of European countries that also use the metric system. But if we’d wanted to use a name that evoked Canada, we would’ve called ourselves the Toques or something.”

Previously Rejected Names: “The very first name that Jimmy and I had was Mainstream. We put out an EP under that name. If anyone can find it on eBay let me know because I’d like one. I really should find that stuff, though I’m sure it’d be embarrassing to listen to now.”

Best Band Names Ever: “The best band name ever is the Flaming Lips. That name evokes a doodle in your notebook at school, like you’d draw a comic strip with an image of lips on fire. I love it. Pink Floyd is amazing, too. It sounds so psychedelic.”

Worst Band Name Ever: “I can’t be bothered to disrespect someone’s name. Why should anyone hear that they have a bad name? They’ll go check their Google Alert and see that someone doesn’t like their name. I don’t want to be responsible for that. I guess I don’t love the proliferation of indie rock band bands that have something to do with the animal kingdom — mostly because Animal Collective are at the top of the food chain in that regard, they’re just the best — but I have to stress that some of my favorite bands fall under that category. Let’s leave it at that.”