Why They’re Called… Cage the Elephant

The Kentucky rock'n'rollers reveal the secret behind their mysterious moniker. 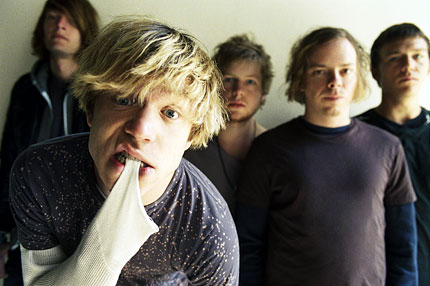 This week: Cage the Elephant, who head out on tour with Stone Temple Pilots this August.

Why Cage the Elephant: “We were in Knoxville, Tennessee, hanging outside a club after a show-this is probably in 2006,” remembers singer Matthew Shultz, “and we saw this guy with a shaved head and a long goatee yelling and screaming and talking to himself. I’m pretty sure he had some mental issues going on. He all of a sudden beelined towards us. Everyone jumped into our car and shut the doors. But I didn’t make it into the car. I was stuck outside. I thought for sure the guy was gonna stab me or something, but then he came up to me and gave me a hug. The whole time he was saying, ‘You have to cage the elephant, you have to cage the elephant.’ Afterwards, I was like, ‘We gotta name the band that.'”

Previously Rejected Names: “We played as Perfect Confusion for a while. That was a terrible name. We thought of it in high school. It was our version of a trippy band name. New Young Lovers is another one I remember being thrown around. And I’ve always said that if I ever do a side project it’s going to be called Pooh Pooh Pee Pee.”

Best Band Names Ever: “For the most part a name’s a name, but I like the Pixies, Let’s Wrestle, Gang of Four, and the Violent Femmes.”

Worst Band Name Ever: “There was a band whose name was pronounced like the name Janis, but whose name was spelled J-Anus. I always thought that was bad.”