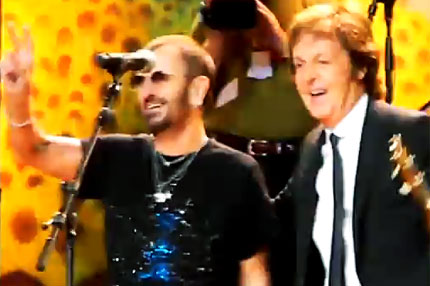 When one Beatle performs, it’s a big deal. But when you’ve got the two surviving members of rock’n’roll’s biggest band onstage together, well, that’s just something else.

Wednesday night, Paul McCartney made a surprise appearance at Ringo Starr’s 70th birthday party in New York City, and the two romped through the Beatles classic “Birthday.” Watch video below.

After a long set at Radio City Music Hall, featuring both Beatles hits and songs penned by other members of Ringo’s All-Starr Band — keyboardist Gary Weaver played his own “Dream Weaver,” bassist Richard Page of Mr. Mister fame rolled out “Broken Wings” — Macca took the stage with his trademark Hofner bass, Starr headed behind the drum kit, and the band stormed through the 1968 single off the White Album.

According to The Examiner, Yoko Ono watched the performance from the wings, as did George Harrison’s widow, Olivia. Other celebs in attendance included Ringo’s wife Barbara Bach, the Eagles’ Joe Walsh, the Eurythmics’ Dave Stewart, and Colin Hay of Men at Work.

Celebrate Ringo’s 70th with the video below, and send him your birthday wishes in the comments section.