The smooth crooner, who broke out singing Travie McCoy's "Billionaire" hook, steps out on his own. 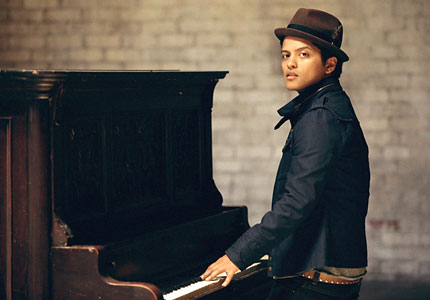 Bruno Mars already has a piece of one of the summer’s biggest hits, having co-produced and sung on “Billionaire,” the Top 10 single from Gym Class Heroes frontman Travie McCoy. But the Hawaiian-born singer-songwriter is building momentum with his debut EP, It’s Better If You Don’t Understand, and just dropped his first video for its first song, “The Other Side.” Watch it below.

The clip is loaded with glamour shots of Mars and his band rehearsing in the studio and hanging out in Los Angeles, seemingly on the verge of a world tour. Sadly, though, there’s no onscreen appearance from the track’s guest stars: Gnarls Barkley singer Cee-Lo Green and rapper B.o.B, whose No. 1 hit “Nothin’ On You” was also co-written and co-produced by Mars.

Still, it’s a good teaser for the 24-year-old phenom’s ample talents, which we first enjoyed earlier this year during a SPIN office performance where Mars teamed with McCoy for an acoustic take on “Billionaire” plus a run through his own “Somewhere in Brooklyn.” Watch it here.

Next up for Mars: an August 25 showcase at NYC’s Bowery Ballroom, followed by an opening spot on the Maroon 5/One Republic tour, starting October 8 in Los Angeles. Check out Mars’ MySpace for details.

Is Bruno Mars the next big thing? Watch the video, then tell us what you think in the comments section.