The Academy Award winner saves the Killers' frontman from badass ninjas in the new clip for "Crossfire." 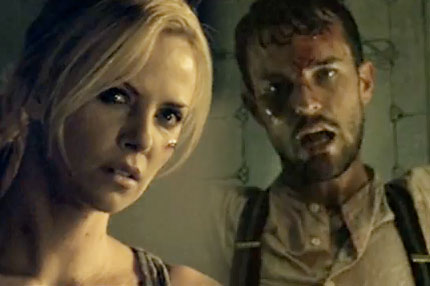 Brandon Flowers has written more than a few songs about his tortured soul, but in the just-released video for “Crossfire,” the debut single off his forthcoming solo album, Flamingo (out Sept. 14), he’s actually being tortured. By ninjas. And only Charlize Theron can save him. Watch the cinematic clip below.

Yes, that’s the Academy-Award-winning actress (Monster) in the tight black tank top, bursting into various enemy lairs to save the Killers frontman from non-sanctioned methods of interrogation, on three separate occasions.

And while Theron busts heads of shady, sword-wielding fighters — by far the best onscreen use of whatever combat moves she learned for the ill-fated Aeon Flux film — Flowers lip-syncs the song’s lilting chorus, about being caught in the crossfire of heaven and hell.

When every ninja is vanquished, the duo drive off into the sunset together in an old pickup truck, safe from harm.

What do you think of the “Crossfire” video? Sound off in the comments section.