The famed graffiti artist wheatpastes an image of the Sri Lankan provocateur in downtown New York. 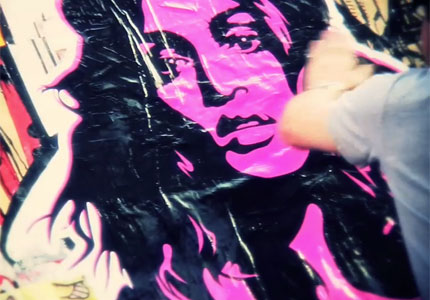 For SPIN’s August issue story about M.I.A., we commissioned street artist Billi Kid to design an image of the Sri Lankan provocateur — and post it on a wall in downtown New York City. Of course, we tagged along on his clandestine mission. Watch the video below!

SPIN’s collaboration with Kid was born from our appreciation of the rising artist’s work, which has appeared everywhere from TIME magazine to the buildings of New York City. Known for his colorful images of pop culture figures like Barack and Michelle Obama (see his website), Kid worked with SPIN to portray M.I.A. through the lens of another iconic pop figure: Marxist revolutionary Ernesto “Che” Guevara, or, more specifically, the image of him that has become synonymous with rebellion.

“Respectfully paying homage to Jim Fitzpatrick’s iconic portrait of Che was a concern from the get go,” Kid tells SPIN. “I wanted to transition M.I.A. and her revolutionary chic in a clear and seamless manner — without having it turn into a campy parody.

“Like M.I.A., I often like to incorporate politics into my work. While her approach is more radicalized and direct, mine is tongue in cheek and ambiguous in nature. I feel the connection lies in that we both find a need to keep the conversation alive.”

Watch the video of Billi Kid’s rebel street art below, then tell us what you think in the comment section.