The co-frontman raps about the band's current U.S. tour and why KISS can live on without him. 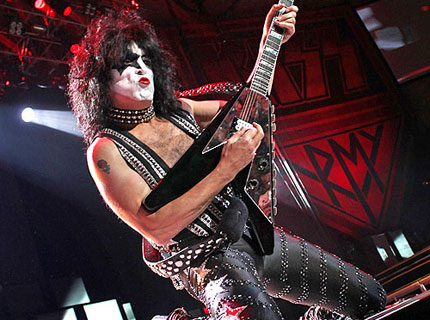 For millions of Americans, KISS concerts are a tradition. You go, you watch Gene Simmons breathe fire and spit blood, things explode, you listen to Paul Stanley’s amazingly brash between-song banter, more things explode, you sing along to “Rock and Roll All Nite,” have about as much fun as is legally possible at an arena, and then experience the spectacle again the next time the band is in town.

That time is now. Starting July 23 in Cheyenne, Wyoming, KISS (with Eric Singer and Tommy Thayer having long ago replaced original bandmembers Peter Criss and Ace Frehley on drums and guitar, respectively) brings its tour in support of 2009’s stellar Sonic Boom back home after a lengthy run of European dates.

“Right now, we’re doing the biggest tours we’ve ever done,” says ever-voluble singer-guitarist Paul Stanley, 58. “The KISS legacy is amazing. Whether you’re looking at the stage or on the stage, everyone involved is having a great time. 37 years into our career, it’s a good be a KISS fan — and I’m as big a fan as anyone.”

On the eve of the tour’s first date, Stanley spoke with SPIN about the shows, the plans for a new album, and the future of the band — a future he may not be a part of.

What will KISS fans see on this tour that they haven’t seen before?
There’s more pyro. The whole stage, in essence, is a video screen — all the amplifiers double as video screens and there are massive video screens behind us as well. The projections on them are phenomenal. There’s a part of the show where [drummer] Eric [Singer] and [guitarist] Tommy [Thayer] do a great musical duel. We’re using technology to make a bigger and better gun.

A love gun, if you will.
[Laughs] It’s a gun that’s better than having guys dancing around trying to mount each other while somebody lip-syncs.

You’ve been onstage with fireworks going off behind you for 35 years. What keeps it fresh?
The first order of business is to please ourselves. Are we changing things up for the fans? We change things up for us. You have to bear in mind that we started out wanting to be the band that we never saw. That continues to be the philosophy. We want to do the greatest show we can for us. I want the band to live up to everything it can possibly be. So this tour, which is a continuation of the Sonic Boom Over Europe tour, is by far the best and greatest show we’ve done. I think so. The fans think so. And the critics, by god, think so too.

What’s your favorite moment in the show?
Flying out over the audience is always cool. The entrance to the show is pretty amazing. It’s heroic and exhilarating. Look, subtlety is not in our name. If you think you’re going to spend your hard-earned money and see some guy with an acoustic guitar sitting on a rug singing about saving the whales, you’re at the wrong show.

How much time do you guys spend thinking about the theatrical elements of the show as opposed to the music?
We spent all of last week just rehearsing the music. Anybody with money can put on a KISS show, but they can’t be KISS. After all the smoke and all the fire and all the big lights have gone off, you better have some good music or it’s not going to be enough.

I’m a big fan of your stage banter. Do you know that there’s a compilation called “Let Me Get This Off My Chest” where someone put together a bunch of the stuff you say in-between songs? It’s sort of a cult favorite.
Yeah, I know about it. I’m not a ham, I’m the whole pig.

Do you plan your banter?

Do you plan your banter?
No. Do things I say become a regular part of the show? Of course. To just go out there and wing it every night means that you have as much of a chance of falling on your ass as you do of winning the race. We’re making sure that you get what you hoped for. So does the banter become part of the show? Sure. I’m always pushing the limits and trying to find other things to say, but let’s be honest, a gem last night is still a gem tonight.

But the tone of your voice when you talk to the crowd is amazing. It’s like this mix of a New York accent and black jive talk and drag queen-y stuff.
It’s a stew. It’s funny because Eric has listened to some of my early banter, and he says I sounded like James Brown. There’s some of that in there for sure. An evangelical preacher is in there. A game show host is in there. There’s some New York City cab driver in there — which I was.

You drove a cab?
Oh yeah. I remember driving people to see Elvis at Madison Square Garden and thinking, “One of these days there’ll be people getting dropped off in cabs to see me.” So yeah, the banter isn’t coming from a created character. It’s a bunch of different elements of who I am and who I’ve seen. I saw Otis Redding onstage. I saw Led Zeppelin. I saw Buddy Guy and John Lee Hooker. If there was music out there, I saw it. And did I soak it all in? You betcha. And there’s a whole lot of people right now out there making music who’ve soaked in what we do.

In some ways though, I wonder if KISS’s legacy ultimately doesn’t have more to do with business than music. You guys have always been forward thinking about things like branding and merchandising.
And proudly so. The business side of the band is something that other bands can’t do. They can’t do it. It’s not of interest to their fans. No one wants an Eagles belt buckle.

But people want KISS coffins and condoms and perfumes.
KISS has always been outside of the borders of what other bands can do. Not that some of these other bands wouldn’t want to do it — the fact that they may snicker or look down their noses at what we do is more out of jealously than anything else.

You’re touring again with Eric Singer on drums and Tommy Thayer on guitar. Do you get the sense that fans have accepted them as members of the band?
Tommy and Eric are not the new guys, they’re the guys. Of course we have some die-hard fans who have their own beliefs, but we just came back from a tour where the smallest crowd was 10,000 people, the biggest was 90,000, and most of them were between 40,000 and 50,000. The tour has really been about the present band. Sorry to burst the bubble for a handful of people, but that’s the truth.

Do you think about a day when someone could replace you in the band? Could you pass the baton to a whole new KISS?
That’s interesting. If I had my way I’d always be onstage. But I won’t always be able to be onstage. At that point, somebody else should be there in my place. As big as my ego may be, I’m really not of the belief that I can’t be replaced. I didn’t invent the wheel. There’s someone else out there who can do what I do, maybe a little differently. I believe that Kiss is bigger than it’s individual members. I would be proud to know that I was right and have somebody else up there in my place when it’s called for. That won’t be anytime soon, but someday it could happen.