"If I was smart I would've made Sixteen Stone over and over again. But that's not me." 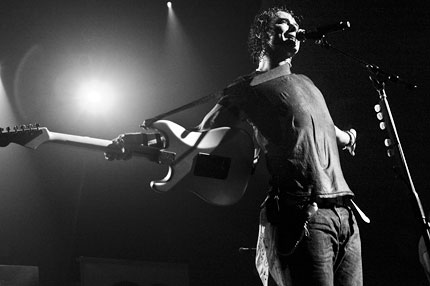 Everything is Zen with Gavin Rossdale.

The London-bred rocker has two sons (Kingston, 4, and Zuma, 23 months) with his wife, No Doubt singer Gwen Stefani, and a successful solo career; his debut album WANDERlust hit No. 8 on the rock charts in 2008. Now he’s returning to his musical beginnings by reforming the post-grunge hitmakers Bush, who split eight years ago.

In June, the band unveiled plans for a reunion concert (singer Rossdale and drummer Robin Goodridge are the participating original members) on September 25 at Los Angeles’ Epicenter Music Festival. Even better, the quartet — also featuring bassist Corey Britz and guitarist Chris Traynor — will release their fifth studio album, Everything Always Now, in October, followed by a worldwide tour.

Chatty and buoyant, the 42-year-old rocker phoned SPIN from his L.A. home to discuss his band’s “evolved” new album, why he can’t say the word “grunge,” and his desire to play Metallica drummer Lars Ulrich in a match of tennis.

What a nice problem to have.
[Laughs] On a superficial level, it’s great.

So, the Bush reunion. Exciting! But why now?
For eight years I’ve been patiently waiting, gently pressing those guys and saying, “Come on, what else is there? What else are we going to do? We’re doomed if we’re not working with Bush.” Then when I began to work on these songs after the WANDERlust tour, I was thinking that the only thing working against this material is me. Being released under my name sucks. It gives the album a ceiling. On the solo tour I was thinking, “Awwww, man, it would be so much better if I could do these songs with Bush, as Bush, and give them a fair run.” So I rang the band up and asked them to do it, and just took whoever was willing [laughs]. Fuck it. Mark E. Smith can do it and it’s always called the Fall. Why can’t I be in that situation?

Did you have any worries about reuniting the band?
Not really. In a way it was liberating. I just wanted to make music I’m proud of and tour. I look at it like a great festival bill. When you’re looking down a bill with great bands, whether it’s Sonic Youth or Pixies or the National, just having your own name up there always felt so weird to me. With Bush it feels far more natural.

Why aren’t original guitarist Nigel Pulsford and bassist Dave Parsons in on the reunion?
Well, I’ve been speaking to Nigel a lot and each time I do a record, I’d ask him to do it. He’s happy and it’s not something he wanted to do — he has a family. I spoke to Dave. I was surprised because I thought he’d do it. He thought about it for the weekend and then said he couldn’t. He didn’t want to commit and then back out — he didn’t know how long he could tour. It’s an absurd amount of work. After all this time away we can’t expect to just reappear without a lot of effort, you know?

How do you balance your personal life with your music?
It’s always painful when I leave on tour. It’s the hardest thing. It never used to be difficult — I just had my dog and that was it. Now it’s not easy, but it’s reality. I want to set an example for my kids. I say, “Look at this house… this is how you get it.” I don’t understand the idea that you’re unable to do both. People have done it for a long time, and you find a balance. I’m not going to be one of those dads who are always away and doesn’t have any contact with home. I’m the opposite. I like that nomadic lifestyle and bringing the kids along is cool — they love it.

Our sound is a bit evolved. It’s interesting seeing the reactions to [first single] “Afterlife.” It’s like, “You’re damned if you do, damned if you don’t.” Some reactions are, “Man, this is great! I love it! Bush are back!” Others are, “This sucks. You should listen to what they were like in 1995.” You can’t win. I would be easy to recreate the same sound — just turn the guitars up and be a little more reckless. But everyone is meant to evolve. [Laughs] But if I was really smart I would’ve made Sixteen Stone over and over and over again. But that’s not me. Being English, there’s that whole club element, too. With The Science of Things, I was trying to expand with songs like “The Chemicals Between Us.” It had some bleeps and whistles and drum machines. With this record it’s about finding the balance between uplifting music that’s got real energy and real vibe, but isn’t bone crushing. Bush, to me, was never a heavy band, but we always had the right amount of thrust. I hope we captured that with this record. I was just mastering the album and it still worries me: “More guitar? More drums?” It keeps me awake at night, but it’s so close to being done. But we’re not recreating what Bush once was. Over our five records, Bush was a different band each time.

Tell me about a few songs on the record.
The album opens with a song called “The Mirror of the Signs,” which is a powerful song. It’s about when you look back on your life and eulogize or get nostalgic about where you’ve been. I lost a couple close friends this last year, one who committed suicide and one who overdosed. It’s rough when you lose people unexpectedly. It makes me wistful for more carefree days. This song is about looking back and seeing yourself in the mirror. You catch these moments when you think about what went down or what happened. I would’ve liked to have more time with those two people. My friend Sean committed suicide while I was on the road. That was really bad. He was a close friend and a great inspiration, but I couldn’t make it back for the funeral. So I wrote something and Gwen read it. She stopped because it was too painful. That shaped the album a lot. Life is so precious but it’s easy to be a little bombastic and not appreciate it.

Has becoming a father and husband changed your writing?
Not really. It’s funny now because in the age that we live in there’s such a focus on celebrity, with Gwen and the whole paparazzi thing. It’s weird when you think of Bob Marley, who had like 14 kids. I don’t know if he was ever asked that question.

Can fans expect a full U.S. tour?
Yeah. We’re talking about possibly releasing an EP before the full album because there was a lot of excitement that came from the first news that we were reforming. Then the single came out, and now it’s doing great on radio… whatever that means nowadays. The record comes in October, but October is a long time from now. I love the idea of an EP. It makes me feel like I’m on Rough Trade Records, which of course I’d love to be [laughs].

Is the Bush reunion a one-off album project?
No, I think it’s the opposite. Obviously, there’s danger in nostalgia. We don’t want people to say, “just please play Sixteen Stone.” I want to make to keep making records that people dig and — “dig,” wow, that’s so Santana, I’ve never used that word. I want to make records that people connect to and I think I’ve done that with this one.

What is the meaning of the album’s title, Everything Always Now?
It’s about the culture we live in and the idea of instant gratification. With music, I love that ability to identify pain and come through it. And even though it’s a difficult for me to say the word “grunge,” I like depressing music because I identify with it. But I also like uplifting, powerful stuff. Opening for U2 for five weeks and watching them onstage every night was incredible. Seeing a crowd truly love what they’re watching is amazing, even when the songs are quite painful. There’s a collective happiness that I wanted to get into the album’s title.

You’re collaborating with Santana to cover a T-Rex song. That seems like an odd pairing.
He’s like Mr. Music. Think of him playing guitar and zoning out onstage at Woodstock… it’s amazing. You don’t turn Mr. Music down. I really wanted to cover [Pink Floyd’s] “Comfortably Numb” with him. I thought he would really nail it. He could out-Gilmore Gilmore. The other track I suggested was T-Rex’s “Bang a Gong” and he picked that one. I was like, “Really?” Anyways. I sang it and now he goes to play on it. He’s the king. I just love to do collaborations and weirdly, well, maybe not weirdly, I’ve been asked to do a lot. I recently did a song with [Finnish cello rockers] Apocalyptica, too.

You’re an avid tennis player. Have you ever played another rock star?
No, not really. But I heard Zach [De La Rocha] from Rage [Against the Machine] really likes to play. I know that [Metallica drummer] Lars Ulrich’s dad was a pro and that Lars went to the [tennis school] Bollettieri Academy. I don’t know if Lars plays anymore, but I’m sure he’s still a great player. I’d love to play him.