The pop star tumbles from an elevated harness during show in Germany. Click here for details. 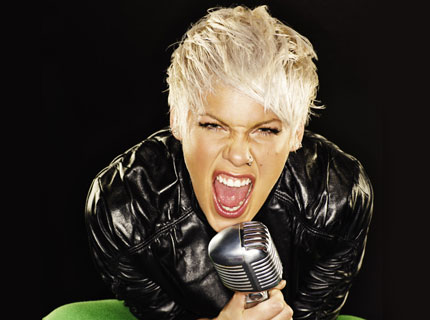 Pink was rushed to the hospital Thursday night after she fell from a suspended harness during her concert in Nuremberg, Germany, and fell onto a steel barricade. A fan captured the incident on video. Watch below.

The 30-year-old singer addressed fans via Twitter on her way to receive treatment. “To all my nurnberg [sic] fans – I am so so so sorry to end the show that way… I’m in ambulance now but I will b fine.”

Pink later explained that her harness had been attached incorrectly. “Didn’t get clipped in2 harness correctly, drug me off stage, fell in2 barricade,” she Tweeted. “Getting xrays. I hope it at least looked cool!!!”

Acrobatics are a vital part to Pink’s Funhouse Summer Carnival Tour — it features numerous circus-inspired stunts plus other stage productions, like huge inflatable harlequins and Broadway-worthy choreography (read our review of her tour kickoff here). At the this year’s Grammy Awards, she sang “Glitter in the Air” while suspended high above the crowd.

But luckily for fans the incident in Germany won’t sideline her tour.

“Full steam ahead people,” she Tweeted Friday. “No pain, no gain.”

Pink’s husband Carey Hart also Tweeted about the accident. “[Pink] is out of the hospital and all good. Just got the shit kicked out of her by the barrier. Steel barrier-1 Pink-0.”

What do you think about Pink’s tumble? Tell us in the comment section below!