"The album is coming along just spectacular," the Young Money MC says. 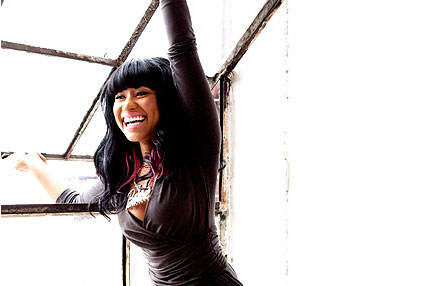 Rapper Nicki Minaj has already notched hit singles with Ludacris and Usher, and currently has the top song on the Billboard Rap chart (the first No. 1 from a solo female MC in eight years), and today she confirmed by Twitter that her much-anticipated debut album will drop November 23.

“The album is coming along just spectacular,” Minaj, one of SPIN’s Breaking Out artists, told MTV News.”I’ve been doing a lot of work with Swizz [Beatz], and the stuff that we been coming upon is magical…. I really didn’t think I would be this excited about the songs that I’m coming up with.”

Known for her theatrical flow and alter egos, Minaj said that audiences will experience a more personal side on her debut. “When people hear the album, they’re going to get to know Onika,” the Young Money MC, born Onika Maraj, said.”And no one knows Onika.”

Up next: the Hype Williams-directed video for her latest single “Your Love,” set for release within the next few weeks!